Manny Pacquiao Not Looking Beyond Next Boxing Fight 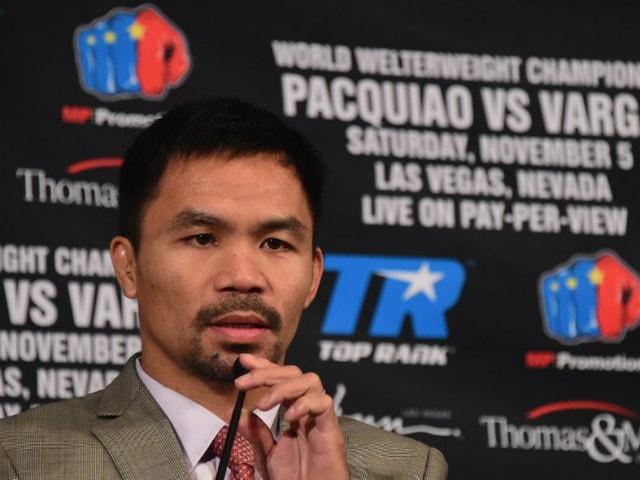 Manny Pacquiao admitted that juggling his workload as a pugilistic politician had proven demanding.© AFP

Filipino star Manny Pacquiao says he remains undecided about his future in boxing beyond this year, insisting he is not looking past his upcoming world title bout with Jessie Vargas.

But the 37-year-old eight division world champion said he has not thought about his plans after the Vargas fight as he continues to juggle the demands of the sport and his duties as a newly elected member of the Philippines Senate.

"Right now my focus is on this fight. Then I go back and do my job, then I could think about 2017," Pacquiao told reporters on a conference call.

Asked if he expected to fight again, he added: "I don't know yet. One fight at a time. I cannot say yes right now.

"Today, Jessie Vargas is the most important fight of my career."

Pacquiao's veteran promoter Bob Arum believes that the Filipino icon will remain in demand if he produces a convincing win over Vargas.

"If Manny comes in and dominates this fight and looks like the old Manny, and wants to continue fighting, there will be certain opponents that will be considered," he said.

"If he decides that it's too much juggling two careers, then he shouldn't continue.

"If he is determined to continue and his performance suffers because of his work in the Senate, I would have to look in the direction of somebody else for an opponent."

Pacquiao meanwhile admitted that juggling his workload as a pugilistic politician had proven demanding.

"I can say that working in the Senate is not easy, especially, along with training," he said. "You need to manage your time and that's what I did in training for this fight while I am working in the office.

"I don't have time really for any other activities -- all of my time is with working and training."

Pacquiao's long-time trainer Freddie Roach, who oversaw a camp in the Philippines before the duo returned to Los Angeles last weekend, said he had detected a more serious side to the boxer.

"I know it's been a very difficult camp with the Senate and so forth," Roach said.

"Manny has always been a busy person but because of the Senate he seems to be a lot more serious than anything else he has done. He is in Senate sessions on some nights until 7:30 or 8:00 at night and when he is done we go right to the gym."