Manny Pacquaio, who announced his retirement after his April 9 victory against Timothy Bradley, is planning to fight again in late October or early November as a main event bout in Las Vegas 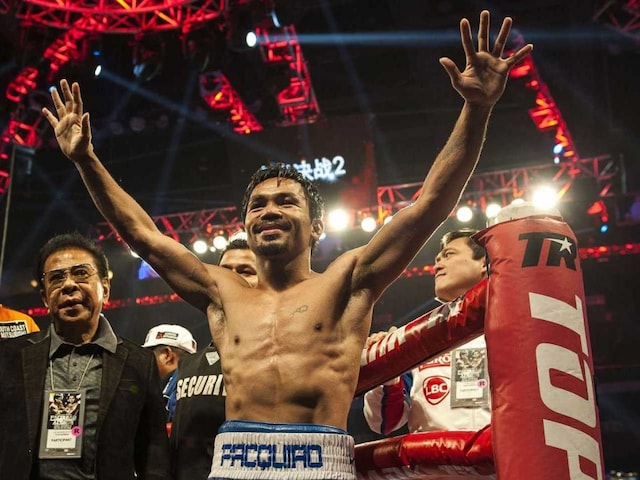 Filipino boxing star Manny Pacquiao plans to come out of retirement to fight an as yet to be named opponent later this year, his promoter said Tuesday, though the boxer said no fight has yet been set.

Bob Arum told American sports broadcaster ESPN that the former welterweight champion plans to fight on either October 29 or November 5 as a main event bout in Las Vegas as long as it doesn't clash with his senate duties in the Philippines.

"Manny wants to come back," Arum said. "The problem is he can only come back if it doesn't interfere with his senate duties."

The boxer had previously planned an October 15 fight in Mandalay Bay Events Center, but scrapped it due to upcoming votes in the senate in his native Philippines, where he now serves.

"The question is building availability because we want to do the fight in Las Vegas," Arum said about the new dates.

Arum said the most difficult part of setting up a fight is working around the busy schedule of the boxer, who has a career record of 58-6-2 with 38 knockouts.

"He now has given us the go-ahead to shop for a venue and an opponent and see if we can do it on a particular date or dates," Arum said.

"We've been trying to work out a date that doesn't interfere with his senatorial responsibilities and his ability to train."

But in a statement, Pacquiao denied any firm plans on a fight.

"There is no truth to media reports that I'm planning to take a leave from my Senate duties just to fight again atop the ring. I want to make it clear -- my priority is my legislative works," he said.

"My next fight has not yet been discussed. Should there be any, I'll make sure it will not interfere with my senate duties."

The boxer said all his training would take place in the Philippines so that he can keep participating in senate proceedings.

"Boxing is my only means of livelihood to support my family and to help those who are in need," he said.

"Politics, to me, is a vocation not a means to eke out a living.

"I want to maintain that belief. I want to keep my dignity intact while in public service."

"Manny's primary concern and obligation is to fulfill his senatorial duties," Koncz said.

"But he misses (boxing). He misses the training. He misses being in the gym. You can see when he trains it's like a stress reliever for him.

"So I am working with Bob and Manny is working closely with the senate president to make sure the dates are OK. We are doing this properly."