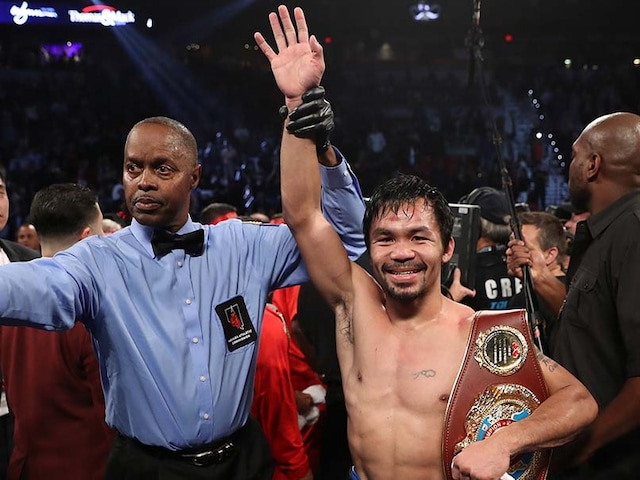 Manny Pacquiao was beaten by Floyd Mayweather in a high-profile bout in 2015.© AFP

Floyd Mayweather accepted an invite to watch Filipino icon Manny Pacquiao's WBO title fight on Saturday, leaving many wondering if a request to step back in the ring would be next.

Pacquiao said on Sunday that he is eager to avenge his 2015 loss to Mayweather and he doesn't feel the contract negotiations would be nearly as acrimonious as they were for the first fight, which became the richest in boxing history.

"Not only for myself, but the fans of boxing want the rematch then why not?" Pacquiao told a group of reporters at his luxury suite at the Wynn hotel and casino. "We can easily talk about that it is not a problem.

"Because we now have direct contact to them it would be easier to talk about when there will be a rematch."

Pacquiao looked impressive Saturday and even showed his power with a second-round knockdown as he reclaimed the WBO welterweight title -- the same belt he lost to Mayweather.

Pacquiao made sure the retired Mayweather was there to witness him win it back on Saturday night. Pacquiao said he found out on Friday that Mayweather would be attending the fight.

"I met with his manager I told him I would invite Floyd and they said OK," Pacquiao said.

There are no talks scheduled between the two and Pacquiao has no idea whether he can entice Mayweather to come out of retirement in 2017.

"We don't have any discussions as for now," said Pacquiao who will fly back to the Philippines so he can be there when the Senate reopens on Tuesday. "It is not in my mind right now for the next fight.

"I want to go back to the Philippines and work at my next job," the first-year Senator said.

Even when he has something to say, Pacquiao will never put all his cards on the table.

Saturday he fought like a boxer who didn't want to spoil a good thing as his comeback from a brief retirement could have easily been derailed by a carelessly getting caught by a punch from the bigger and heavier Vargas.

But Mayweather's appearance at ringside Saturday has stirred talk of a Pacquiao-Mayweather 2.

Mayweather did not speak to reporters after Saturday's fight and has shown no signs of wanting to come out of retirement.

Pacquiao's last two victories have been impressive, showing that he has recovered from the shoulder injury which hampered him in his fight against Mayweather in May 2015.

"I believe if there is a rematch, or if it happens, I want to make sure the fans will love it and I will give everything to get back their trust," said Pacquiao.

Asked why he didn't call off the Mayweather fight because of his shoulder injury, Pacquiao said he didn't think before the fight that the shoulder would be a problem.

"I have no regrets because I felt good one week before the fight. In that kind of fight I hurt my shoulder," he said.

"Floyd Mayweather is retired. As far as we're concerned he's retired and we respect that," Arum said.

But Vargas spoke for many when he expressed an interest in seeing Pacquiao and Mayweather go at it again.

"Of course," Vargas said. "I wouldn't mind seeing it again. We are still very interested in seeing what could happen again."

As with previous Pacquiao fights, the Vargas match was watched by millions in the Philippines and broadcast on large screens in public plazas and malls.

"I messaged him thanking him for his support. In Philippines we don't call people we message a lot," Pacquiao said.

Pacquiao needed nine stitches on the top of his head because of a cut from a head butt in the final round against Vargas.

"When I threw an uppercut he threw a right hand and we banged our heads."