Manny Pacquiao Goes Out on a High, Wins His Farewell Match Against Tim Bradley

Manny Pacquiao defeated Tim Bradley to go out on a high in his farewell match. 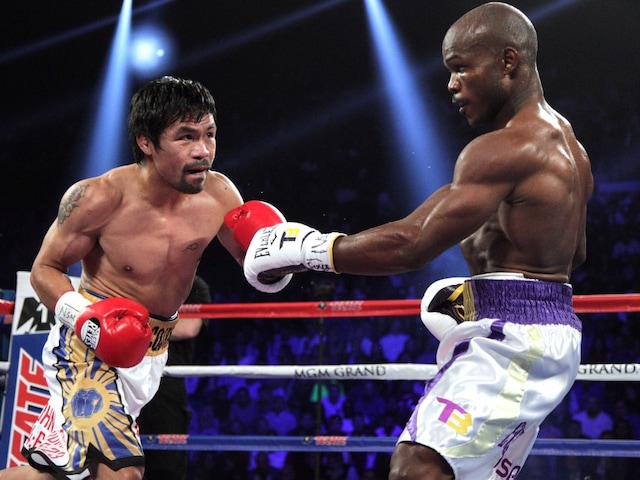 Manny Pacquiao will retire from professional boxing and fight for the elections in Philippines.© AFP

Pacquiao -- fighting for the first time since his defeat to Floyd Mayweather last May in the "Fight of the Century" --knocked down Bradley twice on his way to a unanimous decision.

The judges' scorecards at the MGM Grand Garden Arena told the story of Pacquiao's dominance in the non-title welterweight duel, with the 37-year-old eight-division world champion winning by identical margins of 116-110 on all three cards.

Pacquiao had insisted Saturday's bout -- the 66th of his career -- will be his final fight before he focuses on his political career in the Philippines, where he is seeking election to the Senate next month.

Many ring-watchers, however, are sceptical, believing he may well be tempted to extend a career which has seen him earn more than USD 500 million.

Yet asked afterwards if he planned to stay retired, Pacquiao replied: "I think so. I've made a commitment to my family that I'm going to retire after this.

"Maybe I enjoy being a retired man, serving the people, helping the people," added, before giving a farewell message to his fans.

"Thank you to all the fans in boxing, especially the Filipino people. I've really appreciated all your help and support."

Pacquiao had promised an explosive performance and was as good as his word for long periods, uncorking some trademark combinations to overwhelm Bradley.

"Bradley is a good boxer, he's a champion, he's a man. It was not easy tonight," Pacquiao said, shortly before a warm embrace in the ring which concluded with the two fighters arranging to meet for breakfast on Sunday.

"I fought really good tonight but I don't know what was going on," Bradley said.

"He used his experience against me, his ability and he won the fight tonight...I'm in there with a special man, Manny Pacquiao."

A cagey opening round had the feel of a tactical battle, with Bradley carefully keeping his distance as he circled the marginally more aggressive Pacquiao, who threw 33 punches to Bradley's 19.

The next three rounds followed a similar pattern, with Pacquiao looking the more menacing fighter, relentlessly stalking Bradley around the canvas, cutting off angles, and connecting with more meaningful blows.

Bradley landed occasionally but it was Pacquiao who did the most damage, landing a straight left that caught his American rival flush on the chin in the second round.

Bradley started confidently in the fifth round but again his good work was undone by Pacquiao in the final minute when the Filipino uncorked a series of combinations to score heavily.

A weary Bradley returned to his corner to be admonished by his trainer Teddy Atlas, who yelled "Are you kidding me?" at the 32-year-old as he attempted to raise his fighter for the later rounds.

But the template had been set for the next round, with Pacquiao producing flurries of counter-punching to take the round.

In the seventh, Pacquiao stretched his lead further, scoring a knockdown with a right hook to the chin that sent Bradley falling to the canvas.

Bradley responded bravely in the eighth however, wobbling Pacquiao with a left hook and backing up the Filipino relentlessly.

Yet Pacquiao's response in the ninth was emphatic, luring in Bradley and then tagging him with a left hook to wobble the American.

A further left hook sent Bradley down for the second time leaving Pacquiao with a commanding lead heading into the final three rounds.

Bradley attempted to pressure Pacquiao but the Filipino finished the stronger to coast home.