The lone Indian boxer to step into the ring, Mandeep out-punched his rival 3-0 in a one-sided contest. 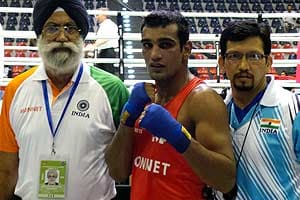 Asian champion Mandeep Jangra (69kg) rounded off a second successive winning day for India at the World Boxing Championships as he eased past Tanzania's Selemani Kidunda to enter the second round of the event here on Wednesday.

The lone Indian boxer to step into the ring, Mandeep out-punched his rival 3-0 in a one-sided contest.

The 20-year-old, who is a protege of former Commonwealth Games gold-medallist Akhil Kumar, was dominant from the word go as he clinched the opening round 30-26.

The perfect-10 performance continued in the next two rounds as well with Mandeep clinching them 30-27 30-27 to sail into the round of 32.

Next up, Mandeep will fight it out against Serdar Hudayberdiyev of Turkmenistan on October 20.

Yesterday, Vikash Malik (60kg) notched up India's first win when he beat Kyrgyzstan's Meder Mamakeev to enter the second round. The reigning national champion will be up against Poland's Dawid Michelus on October 20.

Tomorrow, Vijender Singh (75kg), who opened India's medal account in the mega event with a bronze in 2009, will start his campaign in what is his fourth appearance at the biennial.

The former Olympic bronze-medallist will face Sweden's Hampus Henriksson in his opening bout.

Due to the provisional suspension imposed on the Indian Boxing Federation, the country's pugilists are competing under the International Boxing Association's (AIBA) flag.

The Indians have won a total of two medals in the event, which will feature more than 450 boxers from over 100 countries this year. The boxers are fighting it out without the protection of headguard this year due to the new rules passed by the International Boxing Association.