"I can't wait for the bout. I am fighting in Delhi after six years. Commonwealth Games was the last time and I am very excited," said Vijender Singh ahead of his professional boxing fight against Australian Kerry Hope at Delhi's Thyagraj Sports Complex. The Haryana boxer delivered the goods on Saturday, as he defeated Kerry Hope to lift the WBO Asia Pacific Super Middleweight title. Catch highlights of the bout here. 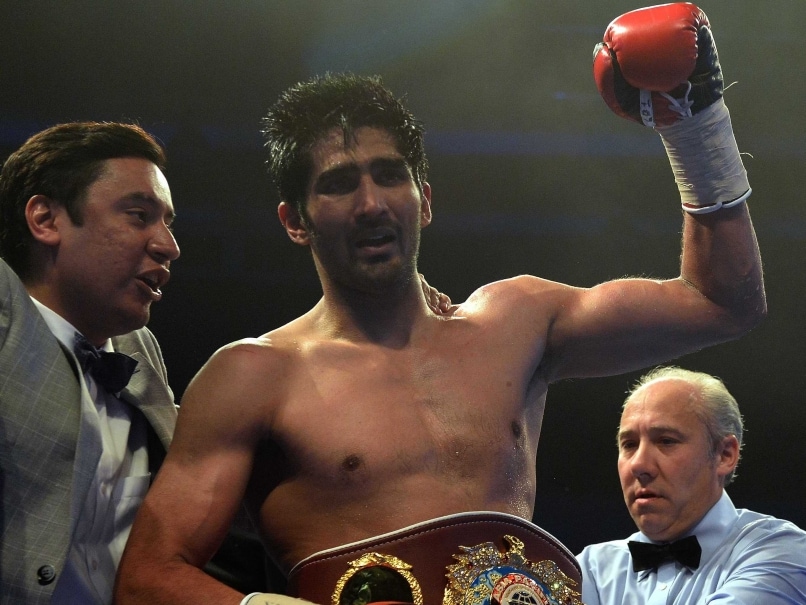 22:50 IST: "This is not about me. This is about my country," an emotional Vijender Singh tells Charu Sharma. He thanks the crowd, his team and applauds Kerry Hope for what was a fighting performance from the Welshman.

22:47 IST:Â Incredible scenes at the Thyagraj Sports Complex as the golden boy of boxing in India wins his first pro boxing title! The Haryana boxer is in tears as he addresses the crowd!

22:44 IST: Kerry Hope on the offensive in the final round, but Vijender Singh holds on. We await the judges' decision now, but it's no secret who the winner is!

22:40 IST:Â Both boxers landed a jab on each other, but Vijender clearly the more dominant of the two. We are into the final round!

22:35 IST:Â Round 8 ends with Vijender managing land a couple of good blows. Kerry Hope, however, is holding his fort with some good defence. We are going into the 9th round!

22:30 IST:Â Round 7 ends on a cagy note, as both boxers adopt a cautious approach. Vijender Singh looks a bit drained. He has never had to go this far in his previous bouts, having knocked out all his opponents. 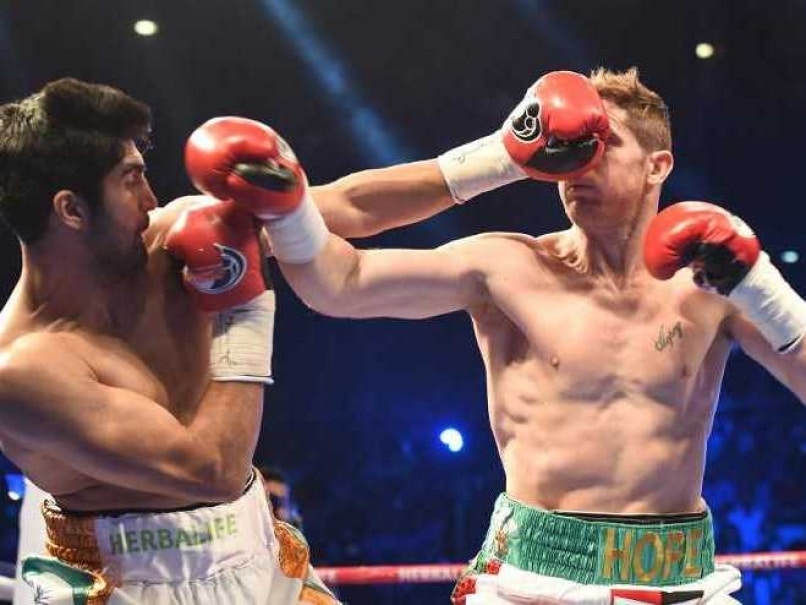 Vijender Singh has made a bright start against Kerry Hope in their WBO title bout.

22:27 IST:Â What a round for Vijender Singh! The Haryana boxer makes a few good connections, and Kerry Hope looks a bit stunned after those hooks on his face.

22:23 IST:Â Another closely-fought round, as we reach the halfway stage. Vijender has been the slightly better of the two so far.

22:19 IST:Â Hope still keeps his hope alive as he lands a huge right hook on Vijender. He, however, has a deep cut just under his right eye.

22:15 IST:Â That was a close third round as Hope managed to land a few punches on Vijender.

22:13 IST:Â Kerry Hope's defence looks a bit sloppy as Vijender manages to land another right hook. He, however, had Â a couple of jabs on his face in the opening stages of the round.

22:10 IST:Â Vijender makes two very good connections. He smirks at Hope and lands a massive right hook on his opponent. He ends the round with two big hooks. Advantage Vijender Singh after the first two rounds!

22:09 IST:Â Vijender slips after a few clever combinations by Hope. He gets straight back up.

22:07 IST:Â It's a cautious display by both boxers in the first round. Vijender Singh ended the round with some good right hooks.

22:03 IST:Â The Indian national anthem reverberates around the Thyagraj Sports Complex, as the crowd joins in on the rendition. The bout is underway!

21:58 IST:Â Loud chants of 'Vijender! Vijender!' from the stands before the two boxers are introduced to the crowd. The national anthems of the two countries are about to be played.

21:56 IST:Â And now the crowd lets out a huge cheer as Vijender Singh makes his way into the ring.

21:52 IST:Â Kerry Hope is the first boxer to step out of the tunnel. He is unsurprisingly met by a hostile crowd.

21:45 IST:Â Vijender Singh is seen getting his wrists taped as he prepares to take on Kerry Hope. The bout is about to start any time now.

21:41 IST:Â "Vijender Singh is our biggest boxing icon. We have big hopes from him," cricketing legend Virender Sehwag tells the TV presenter on the sidelines.

21:38 IST:Â The mood is building up in the stands. Will it be another knockout win for Vijender Singh tonight?

21:33 IST:Â The main event, the bout we have been waiting for these past few weeks, is about to get underway. Vijender Singh and Kerry Hope are about to step into the ring at the Thyagraj Sports Complex in Delhi.

21:24 IST:Â Guess which political bigwig has entered the Thyagraj Sports Complex? It's Congress Vice-PresidentÂ Rahul Gandhi! The MP from Amethi is there to cheer for Vijender Singh.

21:22 IST:Â And Siddharth's title it is! The Indian boxer beats compatriot Dilbagh by unanimous decision.

21:19 IST:Â Siddharth Verma is set to become the IBC Super Welterweight Champion after a dominating display against Dilbagh Thakran. We await the decision of the judges.

21:12 IST:Â Suresh Raina looks eager for the Singh-Hope bout to get underway.

.@ImRaina clicks a selfie at Thyagaraj Stadium as he awaits the #SinghvsHope fight! pic.twitter.com/B9HvM1iWO2

21:08 IST:Â Politicians, sporting icons, B-Town celebs: they are all here at the Thyagraj Sports Complex with Vijender Singh's bout against Kerry Hope only a few minutes away. Will Vijender be able to raise the roof with a win tonight?

21:03 IST:Â Siddharth Verma has been dominant in his bout against Dilbagh Thakran. Four of the eight rounds have been completed so far.

20:55 IST:Â Kerry Hope had vowed to 'chop down' Vijender Singh in their upcoming bout, while the latter had promised to let his fists do the talking in the ring tonight. Will Hope be able to back up his pre-bout trash talk with a solid performance, or will Vijender Singh win the title belt in his first pro bout at home? We are only minutes away from tonight's headline fight.

20:47 IST:Â Meanwhile, Virender Sehwag is in the Thyagraj Sports Complex, with Vijender Singh's bout not long away now.

20:46 ISTÂ Dilbagh Thakran and Siddharth Verma step into the ring as they prepare to start their bout. 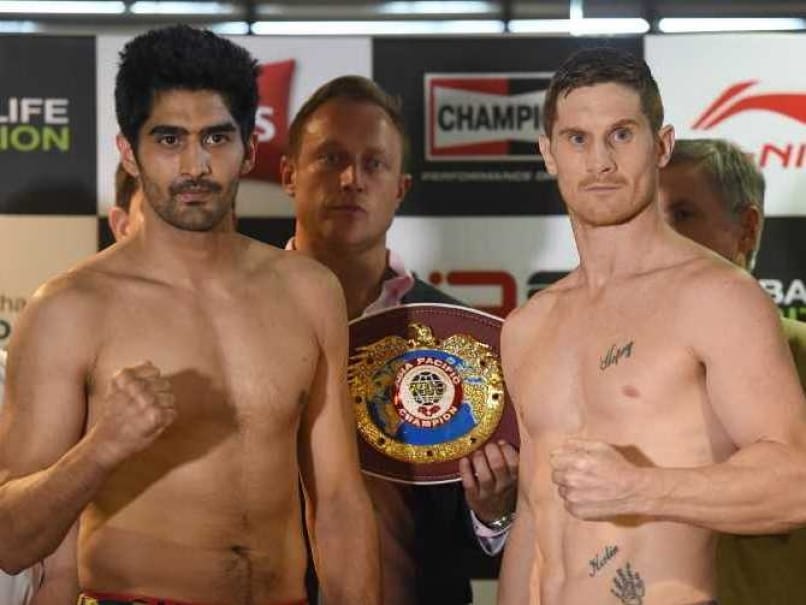 The main event of the night is only minutes away now.

20:20 IST:Â The fight night at the Thyagraj Sports Complex heads into a break as sporting icons MC Mary Kom and Suresh Raina address the crowd.

20:15 hrs IST: The only ladies fight of the evening between Boichong and Nengneihat is going to take place now. It is a special Mary Kom Boxing Foundation match.

20:07 hrs IST: Fans have come in large numbers at the stadium. And they have only one name on their lips - VIJENDER SINGH!

20:00 hrs IST: Suresh Raina is in the house!! Yuvraj Singh is also expected!!

18:53 IST:Â Randeep Hooda and quite a few B-Town celebrities are on their way to the Thyagraj Sports Complex for tonight's main event.

Heading to the #VijenderSingh vs #hope bout this evening.. Hoping for a knock out ?? all the best @boxervijender pic.twitter.com/lt6OwcUVtD

17:45 IST:Â In the first bout of the evening in Delhi, Asif Khan has defeated Sachin Bhot.

17:40 IST:Â Virender Sehwag will be among the list of celebrities who will be at theÂ Thyagraj Sports Complex in Delhi for the bout. Â Will Vijender Singh make the most of the home support and extend his unbeaten record in pro-boxing?

Wishing all the very best to @boxervijender. You will surely make our nation proud. #RingKaKing 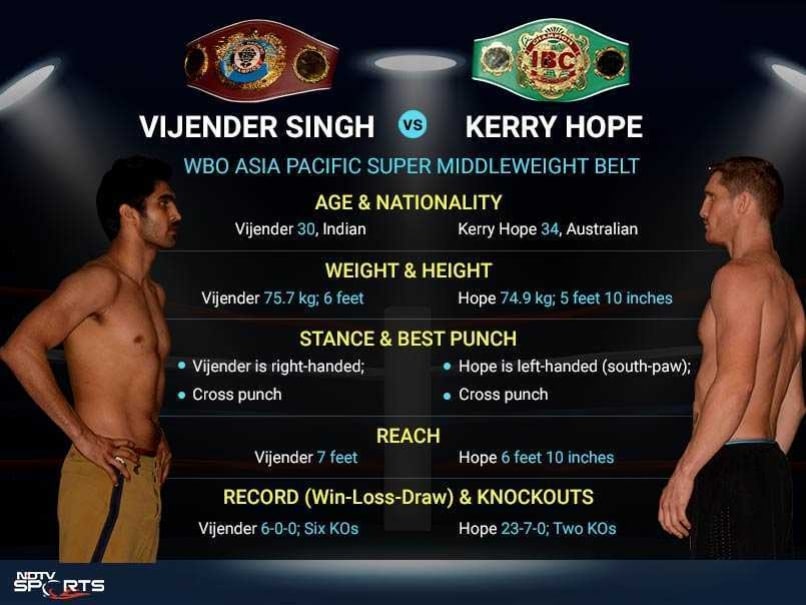 The 10-round affair will be for the World Boxing Organisation Asia Pacific super middleweight title which has been lying vacant for some time. A win will ensure Vijender's entry to the top 15 of the WBO world ranking and bring him closer to the world title fight.

But it will be easier said than done. Although he has a 6-0 win-loss record, Vijender will probably meet his strongest opponent tonight. Hope, 34, has a 23-7 win-loss record in a long career that has seen him winning the WBCC European championship.

All of Vijender's six fights in the UK were one-sided affairs. His opponents spoke more than they fought. Hope is confident too.

"I have trained very hard and I can see that he hasn't. So I am confident. This will open the doors to bigger things in life," the Aussie said.

It surely will be a big night for Indian boxing with several celebrities like Kapil Dev, Yuvraj Singh, Virender Sehwag and wrestler Sushil Kumar expected to attend alongside several Bollywood stars.

Comments
Topics mentioned in this article
Live Blogs Vijender Singh Boxing
Get the latest Cricket news, check out the India cricket schedule, Cricket live score . Like us on Facebook or follow us on Twitter for more sports updates. You can also download the NDTV Cricket app for Android or iOS.