Ibomcha Sing, guru to Mary Kom, Dingko Singh and Suranjoy Singh, was a talented young boxer in 1980s who was chosen to represent India at the President's Cup. At the last moment his name along with another were mysteriously missing in the list, something he still finds it tough to come to term with. 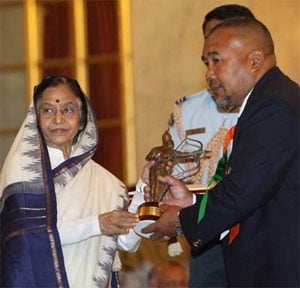 It finally took an Olympic medal for the 5 time world champion MC Mary Kom to be allotted land by the Manipur government to set up a boxing academy. Mary Kom has been operating from a make shift gymnasium, training around 20 odd children and taking care of their schooling and stay, hoping to produce an Olympic medal winner for the country. Government apathy for other sports is nothing new in India obsessed with cricket. Then what is it that makes youth take up boxing in this state?

With the minimum infrastructure in place, kids from nearby villages flock to government run sports institutes in Imphal. All with the hope to follow their dreams and earn a secure future. Ibomcha Singh, guru to Mary Kom, Dingko Singh and Suranjoy Singh says, "there has always been a culture of sports in the state. Manipuris love sports and it does help the youth to get a job in the army or the state government. Hence youth go for boxing.

It was not until the 1980s that boxing became popular. Ibomcha who was then a talented young boxer was chosen to represent India at the President's Cup. At the last moment his name along with another were mysteriously missing in the list, something he still finds it tough to come to term with. Ibomcha recalls, "I was heartbroken, I quit my job in the Army and wanted to start an academy to produce world class boxers". This he accomplished. One of greatest boxers to have represented India ever, Dingko Singh also trained under Ibomcha at the SAI Centre in Imphal. Dingko, lost his father at a very young age and was sent to an orphanage as his mother couldn't support six children. He went to the SAI academy, and after that there was no looking back. He won India's first Asian games gold in 1992, and went on to become the first Indian to be adjudged the best boxer at King's Cup in 1997. When asked why he chose boxing, Dingko said, " I was interested in the sport, as my body felt good after boxing".

Inspired by the success of Dingko Singh, more and more youth in the state started taking up the sport. Mary Kom, who herself admits being inspired by Dingko, followed his footsteps along with the likes of Devendero, Nano and Suranjoy. More success in recent international meets only means the country can hope for medal winners from Manipur. Dingko Singh reflects on his struggle and adds, "I knew I would get a sarkari naukri, if I did well". This probably holds true for all those who need to make ends meet to follow their goals in a state where bandhs, militancy and corruption is just a way of life.