Floyd Mayweather Wants to Retire As 'The Best Ever'

Floyd Mayweather, who has a 48-0 record in boxing, says he wants to leave as 'The Best Ever' after his world title defence in Las Vegas against Andre Berto on Saturday. 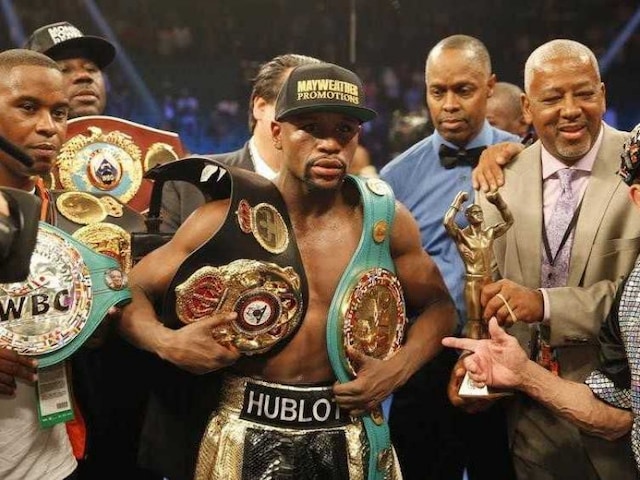 Floyd Mayweather, who has a 48-0 record in boxing, wants to leave as 'The Best Ever' after his title clash on Saturday.© Reuters
Las Vegas:

Floyd Mayweather says he will call it quits after Saturday's welterweight world title defense against massive underdog Andre Berto in which victory would give him a perfect 49-0 record. (Floyd Mayweather Vows to Retire After September)

But boxing -- perhaps more than any other sport -- is littered with men who proclaimed they were hanging up their gloves, only to find the lure of just one more shot at the big time or one last payday too much to resist. (Mayweather Relaxed About Retirement)

The unbeaten Mayweather, 38, the self-proclaimed "TBE" ("The Best Ever"), insists he will not be joining them. (WATCH: Floyd Mayweather Jr is The Real Champion: Vijender Singh)

But then this is not the first time that he has said he is retiring: in 2008 he also said he was done. (Mayweather Cements Legacy with Win Over Manny Pacquiao)

This time is different, he says, because he wants to get out of boxing with his health intact and he has enough money -- Forbes says he is the world's highest-paid athlete -- to avoid having to work another second for the rest of his life.

"If you stick around anything too long, anything can happen. I'm not really worried about losing, but I want to have a sharp mind. You can make a lot of money, but you still want to be able to talk, walk, and have a sharp mind," he said.

"Of course, it's always about self-preservation. I come first but I appreciate the fans. I do. The only thing I can do is believe in myself and believe in my skills. I'm going to be TBE until the day I die."

The American says now is the time to go because he has nothing more to prove.

He also says that he has plenty to occupy him after he stops fighting: he is already a boxing promoter, has his own clothes line and says he wants to develop his interests in the entertainment and music industry.

Last week, Leonard Ellerbe, CEO of Mayweather Promotions, said there had been "significant" entertainment possibilities for the champion for when he calls it quits -- including three "major" movie offers just last week.

"I've been approached on numerous occasions (to act) but I'd rather be behind the scenes. I've had my time to shine," said Mayweather, who has spent time in jail for one of a string of domestic violence incidents.

He also has four children to watch grow up, he says.