Lennox Lewis conceded the fight between Floyd Mayweather and Conor McGregor would attract a large audience simply because there were so many imponderables. 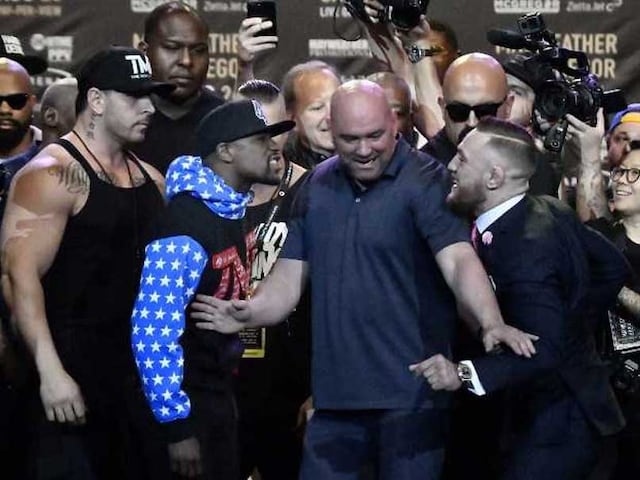 The bout between American boxing legend Floyd Mayweather and Irish Mixed Martial Arts star Conor McGregor is not so much a superfight as a farce, said Britain's former undisputed heavyweight world champion Lennox Lewis on Sunday. Mayweather and McGregor go toe to toe next weekend in Las Vegas -- the unlikely but lucrative clash brought the undefeated former welterweight king out of retirement -- but Lewis told the BBC he wouldn't label it as a "serious fight". Lewis reasoned that as Mayweather's previous 49 opponents had failed to find a chink in his armour there was little reason to believe the charismatic 29-year-old MMA fighter would find him out.

"There is tremendous build-up and hype but I don't really take it as a serious fight," said Lewis.

Lewis, who won Olympic super-heavyweight gold for Canada in 1988 but returned to the country of his birth England when he turned professional, cast doubt on whether Mayweather should be accorded the record for fights without defeat if he defeats McGregor.

Mayweather, who retired from the ring in 2015, presently is tied with another American legend Rocky Marciano on 49.

"He's basically boxing a guy that is a UFC (Ultimate Fighting Championship) fighter and not a boxer."

Lewis, who was world champion three times and is the last undisputed champion from 1999-2001, conceded the fight would attract a large audience simply because there were so many imponderables.

"Everybody wants to know what's going to happen.

"Is McGregor going to throw a kick because, obviously when he resorts to boxing and realises he is no match for Mayweather, what will he do? How will he get around that?

"No other boxers from 49 fights have figured out how to beat Mayweather -- now a UFC fighter that doesn't even have a boxing career is trying to beat him at boxing - I think it's a farce to a certain degree."

However, Lewis said he would not be one of those attending unless he was made an offer he could not refuse.

"I don't think it is a fight that I am going to jump on a plane and go to see unless they pay me to commentate on it," he said.