Olympics-bound Indian boxer L Devendro Singh continued his fine form at the International Republic of Kazakhstan President's Cup by entering the finals with a thrilling win in the last-four stage in Almaty. 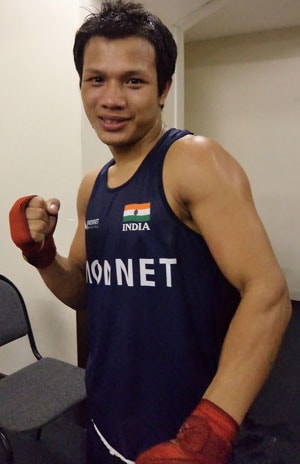 Olympics-bound Indian boxer L Devendro Singh continued his fine form at the International Republic of Kazakhstan President's Cup by entering the finals with a thrilling win in the last-four stage in Almaty.

The 20-year-old triumphed over his more experienced opponent -- Olympian and Asian Games silver medallist Birzhan Zakipov of Kazakhstan -- in an enthralling contest to make it to the final round.

Devendro, who beat Russian boxer Egorov Vasily in the quarters, made a strong start and set the pace of the bout with his fluent ring movement.

He was leading 3-2 after the opening three minutes of play and continued to add to his tally with some precise attacking in the second.

Zakipov though, kept coming back at Devendro with his counter-offence and was close on heels, trailing by just two points (11:-).

In the final round, the Kazakh boxer tried hard to take the game away from the Indian, but Devendro was solid in his defence. He lost the round but managed to win the bout on countback after the scores were level at 16-16.

"My opponent was a very experienced boxer and fought with very sound technique and strategy, it was a tough fight and I am very happy to have returned on the winning side of it," Devendro said.

He will be looking to secure his first gold medal on the senior tour when he takes on Cuba's top Light Flyweight boxer Yosvany Veita in the summit clash.

The other two Indian boxers in the fray in the round of four -- Asian Games silver medallist Manpreet Singh (91kg) and debutant Kanwar Preet Singh (+91kg) -- had to settle for a bronze medal finish from the tournament.

The two Indians lost out to the respective Kazakh opponents in the semi-finals. Manpreet put up a brave fight against Abduganiev Arbek but in the end came up short 12-19. Kanwar, on the other hand, went down in a one-sided contest, losing 3-13 to Dichko Ivan.

Comments
Topics mentioned in this article
Boxing Aaron Baddeley Bill Haas Geoff Ogilvy Tiger Woods
Get the latest updates on IPL 2021, check out the IPL 2021 Schedule and Indian Premier League Live Score . Like us on Facebook or follow us on Twitter for more sports updates. You can also download the NDTV Cricket app for Android or iOS.