Coronavirus: "I Am Hopeful Things Will Improve" Says Boxer Vijender Singh On Fight Against COVID-19

Vijender Singh said, "Obviously, I am at a loss but there is nothing that can be done. So, you just make peace with it and wait for things to normalise". 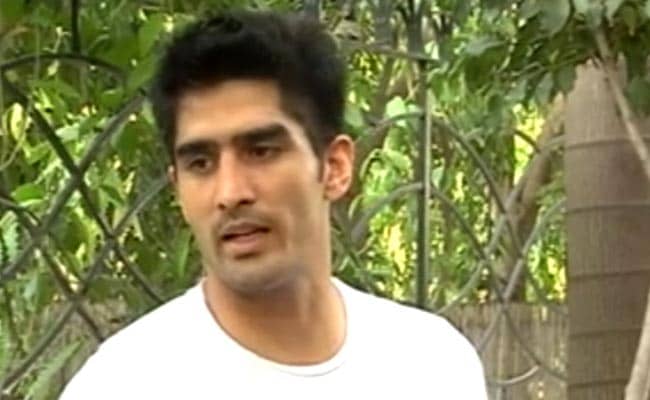 The planning has gone out of the window thanks to the COVID-19 pandemic but hope is intact for India''s professional boxing star Vijender Singh, who is optimistic of resuming his currently on-hold career in the second half of the year. Unbeaten in the circuit with 12 wins, Vijender is contracted with Hall of Famer Bob Arum's Top Rank Promotions in the US, which has been ravaged by the deadly outbreak with the death toll nearing 10,000. "I was supposed to fight in May but that is cancelled for now because of the current situation. But I am hopeful things will improve and I will get to fight later in the year. I think it will work out," the 34-year-old, who holds the distinction of being India's first Olympic medallist in boxing, told PTI.

"Obviously, I am at a loss but there is nothing that can be done. So, you just make peace with it and wait for things to normalise," he added.

The 34-year-old said he is continuing to train at home in Delhi to stay in shape.

"I have everything at home to ensure that I don't need to step out. I do my training on my own, which is not unusual because I have the luxury of a trainer only when I am in England," he said.

Vijender's trainer is Manchester-based Lee Beard, who joins him a few weeks before his fights.

"The idea is to keep my body in shape for whenever the action resumes. I am doing it at home because in any case, you cannot move out," he said.

The boxer is also an active politician and fought Lok Sabha elections on a Congress ticket last year.

Vijender has been actively questioning the government response to the pandemic, which has led to over 100 deaths so far in the country. He said it is not just his right but also his responsibility as a public figure.

"I have spoken to doctors who tell me that we should be testing more people. I hope it is being done. We can only hope that the situation doesn't get worse, look at what''s happening around the world, it's scary," he said.

"So I do raise questions on how we are doing. We all should even if it comes with a bit of trolling, we should not stop asking for better," he added.

And it's not that he isn't doing his bit in the crisis.

"I avoid getting into mass-feeding of people because that would ensure that social distancing goes for a toss, defeating the whole purpose of a lockdown. So what I do is ensure that ration reaches needy families," he said.

"I am directly in touch with people and reach out wherever there is a requirement," he said.

Close to 13,00,000 positive cases have wreaked havoc on the health care systems across the world with no clear breakthrough yet on the treatment of the deadly disease.