World medallists Gaurav Bidhuri and Shiva Thapa were the notable omissions, while the likes of MC Mary Kom and Vikas Krishan were picked in India's boxing squad for the Commonwealth Games, selected for the first time without conventional trials on Wednesday. 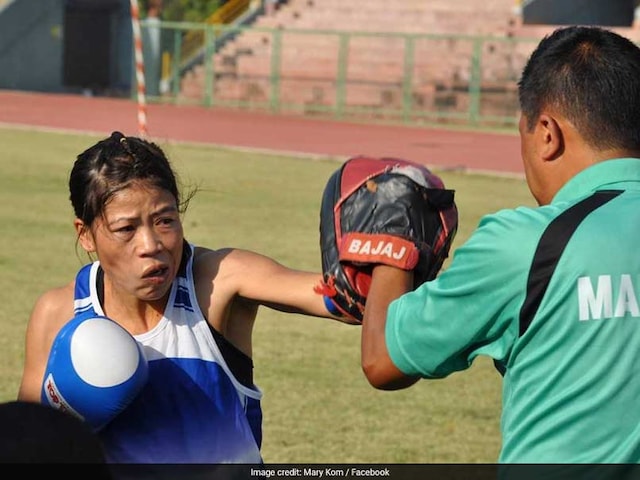 Mary Kom was picked in India's boxing squad for the Commonwealth Games.© Facebook

World medallists Gaurav Bidhuri and Shiva Thapa were the notable omissions, while the likes of MC Mary Kom and Vikas Krishan were picked in India's boxing squad for the Commonwealth Games, selected for the first time without conventional trials on Wednesday. Three-time Asian medallist and 2015 world championship bronze-winner Shiva made way for national champion and India Open gold-medallist Manish Kaushik in the lightweight 60kg category. Shiva and Manish have faced off twice so far, national championship final and India Open semifinal, with the latter winning on both occasions.

In the bantamweight (56kg) category, Bidhuri, out of action since his world championship bronze in August last year owing to a back injury but fit now, has been left out for Mohammed Hussamuddin, who won a bronze medal at the recent Strandja Memorial Tournament in Bulgaria.

Trials will only be held for male boxers in the 91kg and 52kg categories on March 1 and 4 respectively, while among the women, world silver-medallist Sarjubala Devi's name in the 51kg division will be sent based on her performance in a competition trip to Kazakhstan starting March 2.

The criteria for selection of the rest of the squad was a points system put in place before the men's National Championships last year in October.

The boxers were marked for their performances leading up to the Strandja Memorial earlier this month. But surprisingly, they were made aware of this selection process only in January.

"There was no briefing to explain the selection process or the points system. Nobody had a clear idea what is at stake," a top official told PTI.

In the men's 49kg category, Amit Panghal has got the selectors' nod based on his gold medal winning show at the India Open and the Strandja Memorial, while in the 75kg division, world bronze-medallist Vikas Krishan has pipped Mandeep Jangra.

Vikas has been selected on the basis of his twin feats of a gold medal and best boxer trophy at the Strandja Memorial despite being behind Mandeep in the points system. Vikas' points tally had suffered due to his injury-forced absence from the Nationals as well as the India Open.

The 69kg men's category has the veteran Manoj Kumar, a gold-medallist at the 2010 Commonwealth Games. He had clinched a bronze at the India Open.

In the +91kg category, Asian Games bronze-medallist Satish Kumar has been selected, while the 64kg and 81kg divisions have been dropped to keep up with the stipulated size of the contingent.

In the women's team, Mary Kom was expectedly picked in the 48kg category after claiming two gold and a silver in various events held in the last four months, while L Sarita Devi retained her place in the 60kg category.

Lovlina Borgohain (69kg) has been selected on the basis of her gold-winning performance in the India Open. The federation has stuck to its decision to drop the 57kg category despite protests by world and asian silver-medallist Sonia Lather.

The last date for the submission of the squad is March 5.