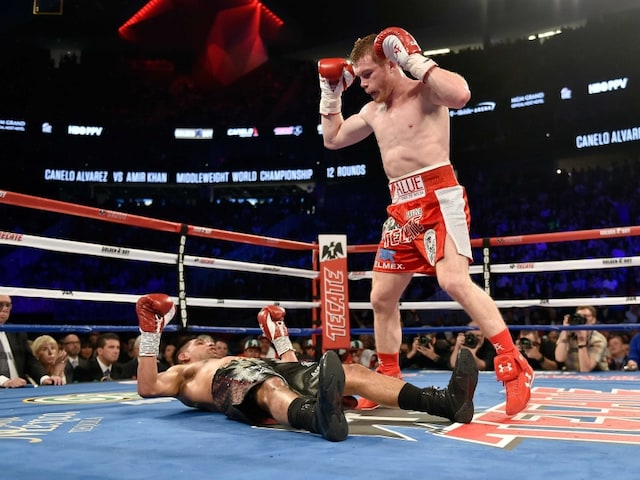 Canelo Alvarez (right) stands over Amir Khan after delivering a knockout punch during the sixth round of their WBC middleweight title fight.© AFP

Canelo Alvarez defended his World Boxing Council middleweight belt on Saturday night by knocking out Amir Khan with a vicious right hand late in the sixth round of their Las Vegas title fight.

The 25-year-old hard-hitting Mexican dropped Khan with a straight right over a passive left jab that sent the Briton crumpling to the canvas with just 23 seconds left in the round.

The back of Khan's head bounced off the deck, prompting his corner to rush to his aid as he lay motionless for a couple of minutes.

Khan eventually got up and went to his corner.

"Many people talk about my power but I have many more qualities in the ring and people saw that," Alvarez said. "I like to surprise everyone."

The savage end to what was supposed to be the biggest fight of Khan's career will undoubtedly strengthen the notion that he has a soft chin.

It was a shocking end to what had been a close fight up to that point.

The 29-year-old Khan, who moved up two weight classes to face the bigger champ, started strong and even won the first couple of rounds before Alvarez worked his way into the fight at the brand new T-Mobile Arena.

"He's very fast. So I knew it would be complicated at the beginning," Alvarez said. "But I knew the time would come to my favor and you saw that."

Alvarez is now mandated by the WBC to fight unbeaten two-belt champ Gennady Golovkin, who was ringside Saturday.

After the fight Alvarez (47-1-1, 33 KOs) stood in the centre of the ring and called out Golovkin during the post-match interview.

"I invited him to the ring," Alvarez said. "Like we say in Mexico .... We don't fight for rings and stuff. We don't come to play. I fear no one in this sport."

At Friday's weigh-in, both boxers scaled 155 pounds, bang on the catch-weight limit.

Many Mexicans were in Las Vegas to celebrate the Cinco de Mayo festival weekend, meaning the majority of the crowd was on Alvarez's side.

There was also a vocal contingent of Khan's fans, who made the trip from Britain for the title fight.

The challenge for former junior welterweight champion Khan is to overcome another crushing knockout as his record dropped to 31-4 with 19 knockouts.

"I showed my balls by getting into the ring with a big guy. I am one of those fighters who will step in the ring with whoever," said Khan, who was knocked out for the third time in his career.

This was Khan's first go at middleweight and he said he has no plans to continue to fight in the 160-pound division.

"The challenge came and it was hard to turn down. My natural weight is 147 and I will be going down to that," he said.

Alvarez-Khan was the first boxing match to take place at the 20,000-capacity arena. The USD 375 million facility opened last month.