Ten men and three women form the 13-strong team which will be in action during the Asian Qualifiers, which commences from March 25. 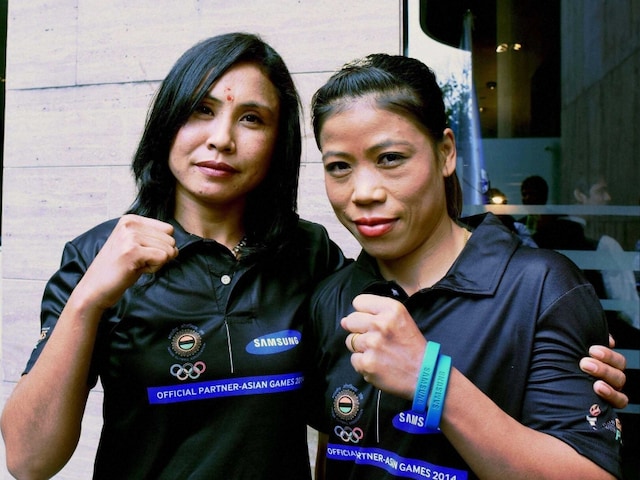 MC Mary Kom and Sarita Devi have been in top form and will look to book a berth for the Rio Olympics.© PTI

Determined to keep the Olympic dream alive despite the long-standing administrative mess, a spirited Indian boxing team, featuring the likes of M C Mary Kom and Shiva Thapa, will take off for the Asian Qualifiers in Qian'an City, China. (Read More in Boxing)

Ten men and three women form the 13-strong team which will be in action from March 25. In the men's competition, only the top three boxers in each weight category will make the Olympic cut with the third spot decided via a box-off between the two bronze-medallists.

In the women's draw, only the gold and silver medal winners will qualify for Rio de Janeiro.

In the absence of a recognised federation, the Indians will once again compete under the flag of the International Boxing Association (AIBA).

"It is going to be a very tough tournament because not many from the Asian region qualified during last year's World Championships. I am expecting around 30 countries and more than 250 boxers to be there at this event," national coach Gurbax Singh Sandhu told PTI ahead of the team's departure.

None of the Indian boxers have so far qualified for the Olympics. During last year's World Championships, Shiva (56kg) won a rare bronze medal for the country but could not seal an Olympic ticket owing to his loss in the quota box-off.

It is not going to be any easier at the continental qualifiers either.

"If you start thinking about the difficulties, you only make it tough for yourself. So it's better to focus on what one actually can do. We have trained hard just the way we do before any big event and hopefully, we shall deliver," said Shiva, who recently won a gold medal at the South Asian Games in Guwahati.

"It is a strong team with proven performers and even though the competition is going to be immense, I am hopeful of good results," said Sandhu.

Their resolve notwithstanding, an undeniable reality of Indian boxing is the shoddy state of its administration. The country has been without a national federation for almost a year now and an ad-hoc committee appointed by AIBA is running the sport.

Such is the state of affairs that even if boxers earn qualification in China, they may not get to compete in the Olympics should AIBA go ahead with its threat to crack the whip and suspend them for the failure of country's administrators.

"One can't deny that the circumstances are tough but we are doing our job. The biggest setback in all this has been the lack of exposure trips to countries like Cuba. The boxers have suffered on that front," Sandhu said.

"But I am very proud of the way they have handled themselves and we have also got good support from the Sports Authority of India (SAI) in continuing the camp in Patiala," he added.

Apart from this upcoming event, Indian boxers will have one last shot at Olympic qualification in an AIBA event in June which will also be open to professional boxers from across the globe.