Asian Boxing Championships: India's review of the second round decision in Amit Panghal's 2-3 loss to Uzbekistan's Shakhobidin Zoirov on Monday in the 52kg final was rejected by the jury. 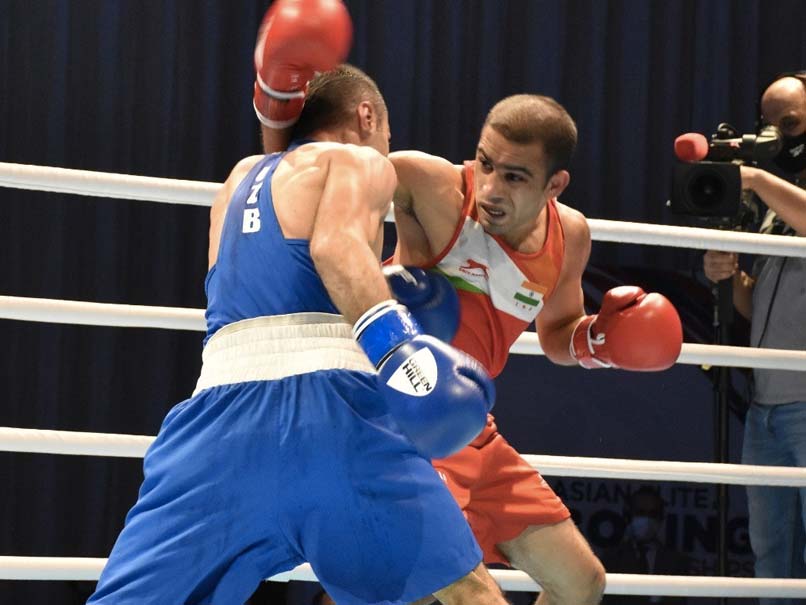 Amit Panghal lost in the 52kg final to Shakhobidin Zoirov of Uzbekistan.© BFI

India's protest against defending champion Amit Panghal's 2-3 loss in the 52kg category finals of the Asian Boxing Championships was rejected by the jury here on Monday. Panghal lost 2-3 to Uzbekistan's Shakhobidin Zoirov. "India has contested the R2 decision of the spilt verdict  2-3 and surprise loss of @Boxerpanghal in the finals of ASBC #AsianEliteBoxingChampionships in Dubai against reigning World & @Olympics champion S Zoirov of Flag of Uzbekistan," BFI had tweeted, before tweeting an update: "The protest lodged by Indian Team had not been accepted by the Jury Commission and @Boxerpanghal ends his ASBC #AsianEliteBoxingChampionships campaign with a silver medal medal."

The protest lodged by Indian Team had not been accepted by the Jury Commission and @Boxerpanghal ends his ASBC #AsianEliteBoxingChampionships campaign with a medal https://t.co/AjcrPRnISA

Earlier in the tournament, Indian boxer Sakshi Choudhary (54kg) had lost her final spot after her rival, top-seeded Kazakh Dina Zholaman, successfully challenged the narrow victory that the two-time youth world champion had clinched in the last-four stage.

The bout review system was introduced by the International Boxing Association (AIBA) in 2019. The team manager or the head coach of the losing boxer gets 15 minutes after the decision is announced to submit their protest and complete the paperwork for it in the next 30 minutes.

Decisions with scores 5-0 or 4-1 are not reviewable under this system. Each team is allowed up to two failed reviews.

"If the Technical Delegate determines, after consulting the Bout Review Jury, that the protest should be allowed to proceed, the bout will be reviewed by the Jury - the Observer, the Referee Evaluator and the Judge Evaluator," the AIBA had said.

In case of a protest claiming that an AIBA technical rule was violated by the referee, the aggrieved team has to specify the breach, the round in which it allegedly took place, and how it affected the final result. The jury's decision must be unanimous and will be final.

Comments
Topics mentioned in this article
Amit Panghal Boxing
Get the latest updates on ICC T20 Worldcup 2022 and CWG 2022 check out the Schedule, Live Score and Medals Tally. Like us on Facebook or follow us on Twitter for more sports updates. You can also download the NDTV Cricket app for Android or iOS.