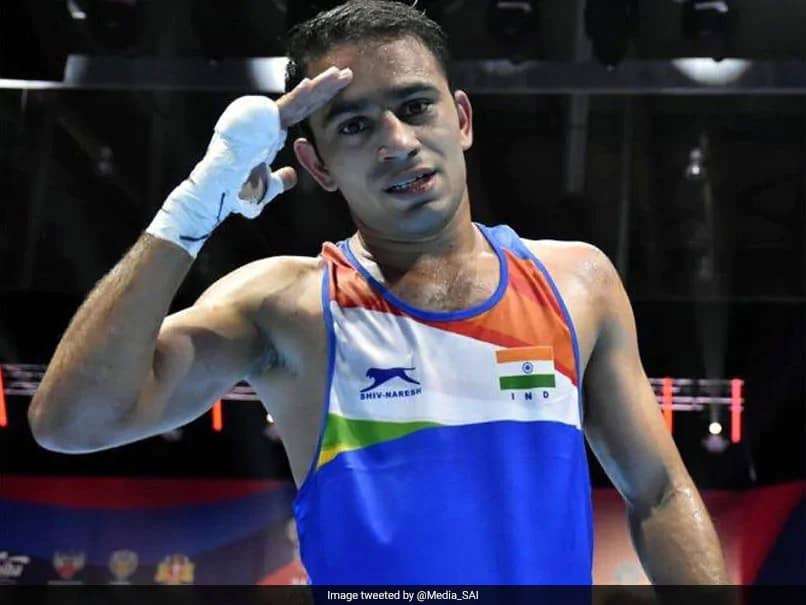 This was Amit Panghal's first tournament since the Olympic qualifiers in Jordan.© Twitter

World silver-medallist Amit Panghal (52kg) and Sanjeet (91kg) struck gold in their first competition after a coronavirus-forced break, claiming the top honours at the Alexis Vastine International Boxing Tournament in Nantes, France. Amit, also an Asian Games champion besides being Commonwealth Games silver-medallist, defeated American Rene Abraham 3-0 with a dominating performance on Friday night. Sanjeet, a former India Open gold-medallist, too put up a clinical show to get past Frenchman Soheb Bouafia in his summit clash and secure a gold.

In the 75kg category, Asian silver-winner Ashish Kumar also claimed a gold after his opponent, American Joseph Gerome Hiks, gave him a walkover due to injury.

However, Asian silver-medallist Kavinder Singh Bisht (57kg) settled for a silver medal after going down to local favourite Samuel Kistohurry in a split 2-1 verdict.

This was the first international competition that Indian boxers featured in since the Olympic qualifiers in Jordan in March.

In that event, nine Indians -- five men and four women -- qualified for the Tokyo Olympics, postponed to next year because of the COVID-19 pandemic.

The Indians' competition calendar as well as training schedule has been severely hampered by the shutdown that followed the spread of the pandemic which has caused a bar on sparring at the national camp in Patiala.

The camp resumed in August amid strict health safety protocols and was open to only the Olympic-bound and hopefuls.

The Indians are currently on a 52-day training trip to Europe during which they have been primarily based in Assisi, Italy.

The boxers and their support staff left for the trip on October 15.

Comments
Topics mentioned in this article
Amit Panghal Boxing
Get the latest updates on IPL 2021, IPL Points Table , IPL Schedule 2021 , live score . Like us on Facebook or follow us on Twitter for more sports updates. You can also download the NDTV Cricket app for Android or iOS.