Amir Khan Hoping 'To Do A Leicester City' Against Saul Alvarez

The 29-year old Amir Khan faces the toughest test of his career when he fights against Saul Alvarez, whose only defeat came against Floyd Mayweather three years back. 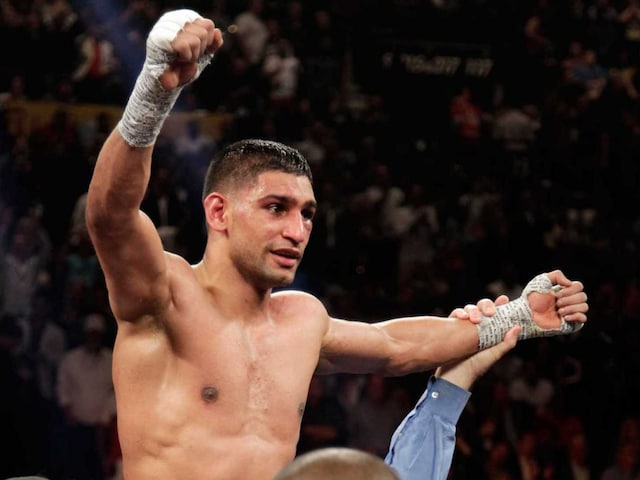 Amir Khan, who normally fights at welterweight, is stepping up by two divisions to face Saul Alvarez, a destructive puncher who has compiled an impressive 46-1 record with 32 knockouts.© AFP

The 29-year-old Khan will start as a massive underdog when he gets into the ring to face the hard-hitting Alvarez at the gambling haven's sparkling new 20,000-seat T-Mobile Arena.

Khan, who normally fights at welterweight, is stepping up by two divisions to face Alvarez, a destructive puncher who has compiled an impressive 46-1 record with 32 knockouts.

The world title showdown is billed as a classic contrast of styles, pitting the elusiveness and speed of Khan (31-3, 19 knockouts) against the brute strength of the naturally bigger Alvarez.

But in a week when the exploits of 5,000-1 shots Leicester have captivated the sporting world, Khan believes he is able to write another fairytale win.

"I'm seen as the underdog in this fight against Canelo but I feel this is the year of the underdog," Khan said after arriving in Las Vegas this week.

"What Leicester City achieved is absolutely amazing. You would have been called crazy if you thought that Leicester would win the title at the start of the season -- it's such an inspiring story.

"I'm definitely going to use that to help me. I'm ready to shock the world and beat Canelo. I know I'm ready for this fight and want to get in the ring right now."

Yet the bullishness of the challenger cannot mask the fact that even his trainer, the San Francisco-based Virgil Hunter, was sceptical about the wisdom of choosing to fight Alvarez.

"Initially I didn't like the fight. But I hadn't seen Amir. So when he came to camp I was surprised to see how much he had grown," Hunter said.

Khan's corner will hope the Briton's mesmerizing hand speed will give him the advantage against Alvarez, whose only defeat came against another fighter with similar skills, the now retired Floyd Mayweather, in 2013.

The fight could hinge on whether Khan will be able to stick and move for 12 rounds while simultaneously avoiding Alvarez's heaviest body blows.

Alvarez is confident he will be able to hunt down an opponent who continues to face questions about his chin after more than a decade as a professional.

"I'm very happy with the work that I've done -- he's a very fast, elusive, tricky fighter. I know the work I've done and I'm confident I can go in there and break him down," Alvarez said.

"He will be surprised. Many think it's just about my power but when they get in the ring they realise that's not all there is."