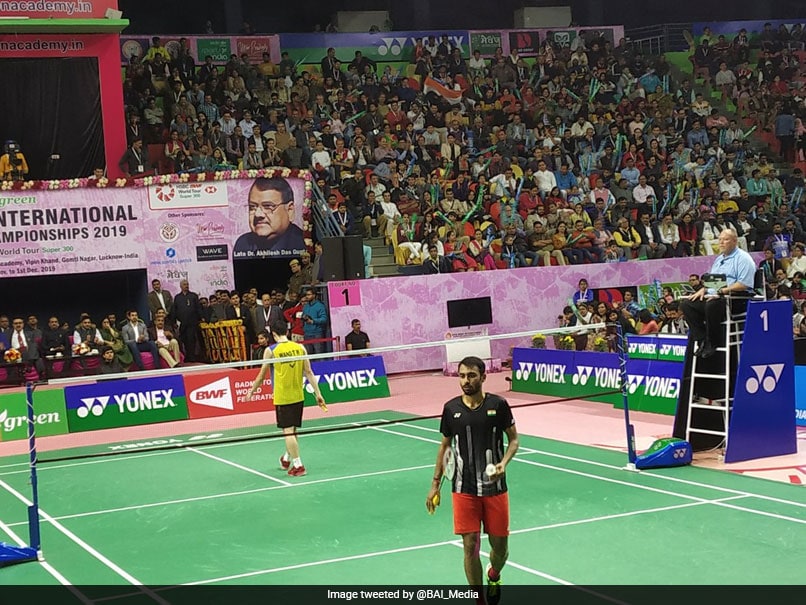 Sourabh Verma's impressive run in the Syed Modi International tournament came to an end in the final.© Twitter

Indian shuttler Sourabh Verma's impressive run at the Syed Modi International tournament came to an end after he lost in straight games to Chinese Taipei's Wang Tzu Wei in the men's singles final in Lucknow on Sunday. The 26-year-old Verma, who won two BWF Super 100 titles in Hyderabad and Vietnam this year, went down 15-21, 17-21 to world no 22 Wang Tzu Wei in a 48-minute clash in the final to miss out on his maiden Super 300 crown.

Sourabh came into the summit clash with a 1-1 head-to-head record, having lost narrowly to Tzu Wei at the Tong Yun Kai Cup in March this year.

The Indian, who was at the court for 75 minutes duringhis semifinal win over South Korea's Heo Kwang Hee on Friday, couldn't produce his best in the final as Tzu Wei claimed his first title in three years.

The duo engaged in long rallies with Sourabh trailing 1-3 initially but the Indian soon managed to make it 4-3 in his favour.

Sourabh waited for errors from his opponents and punished any weak returns to grab a 7-4 advantage.

Tzu Wei then tried to play closer to the net and it worked as he not only drew parity at 8-8 but lead 10-8.

Sourabh grabbed two points before finding the net as Tzu Wei held a slender 11-10 lead at the break.

The Taiwanese shuttler dominated the proceedings after the interval and opened up a 18-13 lead after the Indian went long.

Tzu Wei eventually sealed the opening game after the Indian made a judgement error at the backline.

In the second game, Sourabh struggled with the length and lagged 0-5 at the start. A superb backhand shot gave him a point but Tzu Wei put a lot of power in his smashes to make life difficult for the Indian.

Sourabh fought his way back to narrow the gap to 5-7 before a focussed Tzu Wei managed to hold on to a three-point lead at the break.

The momentum shifted in Sourabh's favour after the breather as he clawed his way back at 13-13 when Tzu Wei went wide.

Tzu Wei broke the run of play with a body smash before Sourabh returned the favour and grabbed the lead for the first time in the second game at 15-14.

The Taiwanese, however, again took the lead and grabbed three championship points and sealed the match when Sourabh went long again.

Comments
Topics mentioned in this article
Sourabh Verma Badminton
Get the latest updates on India vs Australia and check out  Schedule, Results and Live Score. Like us on Facebook or follow us on Twitter for more sports updates. You can also download the NDTV Cricket app for Android or iOS.