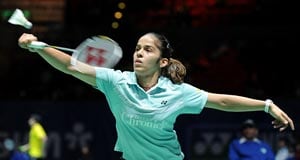 It was Saina's second victory against the unseeded Korean in an as many meetings, having defeated her in the Indonesia Open Super Series last year.

World No.4 Saina took early control of the match. She took seven points in a row from 6-7 to lead 13-7. The Indian then consolidated on the lead and won the first game.

In the second game, Saina opened up a 7-3 lead and never allowed the Korean to come back, taking a grip over the match and wrapping it up in 43 minutes.

After a fabulous 2010 when she won the Indian Open, Singapore Open, Indonesia Open and Comonwealth Games gold, Saina injured her ankle in the final of the Hong Kong Open, which she won, in December.

She missed the season-opening Malaysian Open and was rusty in her comeback tournament at the Korean Open, making an early second-round exit.

At the All England Championship, Saina found her touch but then went down to Japanese Eriko Hirose in the quarterfinals.

She avenged the defeat against Hirose in the second round here and then went on to scalp Bulgarian Petya Nedelcheva, seeded sixth, in the quarterfinals and South Korean Joo Youn Bae, seeded fourth, in the semifinals.

Second seeded Saina, who had been in good form in the tournament, broke free from 6-7 in the first game, taking seven points in a row to lead 13-7. The Indian consolidated on the lead and won the first game.

In the second game, Saina opened up a 7-3 lead and took firm control of the match. She never allowed the Korean to come back and raced to victory.