Saina Nehwal will be missed but lot expected of Sindhu in Sudirman Cup, says Pullela Gopichand

With hardly any time left to name a replacement for Saina, the Malaysian Grand Prix Gold champion, world no. 13 Sindhu is all set to spearhead the Indian challenge in the women's singles. 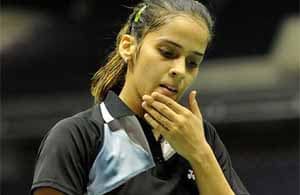 Drawn alongside strong teams such as China and Indonesia, India would find the going tough, especially in the absence of Olympic bronze-medallist Saina Nehwal, at the Sudirman Cup Mixed team Championship starting on Sunday.

The Indian team suffered a major blow as far as the women's team was concerned when Saina and doubles specialist Jwala Gutta pulled out of event.

Saina opted out of the competition, to be held from May 19 to 26, after she failed to recover fully from a hairline fracture on the small toe of her left foot.

The world number two had suffered the fracture before the India Open Super Series last month and aggravated the injury during the tournament, where she had crashed out in the second round.

With hardly any time left to name a replacement for Saina, the Malaysian Grand Prix Gold champion, world no. 13 Sindhu is all set to spearhead the Indian challenge in the women's singles.

National coach Pullela Gopichand said while Saina's absence would be a big blow but it would a great chance for the 17-year-old Sindhu to stand up and be counted.

"India had always looked to Saina during big events. But the unfortunate injury has upset our plans. But Sindhu has made good strides in the last few months. It will be a huge experience to play in team championship at a young age," Gopichand had said.

In the men's singles, meanwhile, Indian hopes would rest on the shoulders of world no. 11 Parupalli Kashyap. The other player would be Anand Pawar, who reached his first ever semifinal of a Super Series during the India Open in New Delhi last month.

Ranked 10th in the world in this year edition of Sudirman Cup, India are placed in a tough Group 'A' of Level 1 alongside defending champions China and inaugural champs Indonesia.

While it will be almost an impossible job to breach the Chinese Wall, who have the number one ranked combination in women's and mixed doubles, India would fancy their chances against Indonesia.

To qualify for the quarterfinals, India would need to beat at least one of the two rivals to advance to the next stage. And they would be looking to put it across the seventh ranked Indonesians.

There will be five matches -- singles (men and women), doubles (men and women) and mixed doubles -- and the Indians will bank on Sindhu and Kashyap to come to the team's rescue against Indonesia, who have some top doubles combinations in their ranks.

With three doubles and two singles matches in each round, India will face a huge problem against a strong China which has the number one ranked combination in women's and mixed doubles.

While both Kashyap and Sindhu have a good chance of toppling the Indonesians in the singles round but the world number 50 combo of Ashwini Ponnappa and Pradyna Gadre may find it difficult.

India, however, would draw confidence from the fact that both Kashyap and Sindhu had registered victories against the top-ranked Chinese players earlier.

While Kashyap had beaten world No. 2 Chen Long, Sindhu had also won against world number one Li Xuerui last year and then Shixian Wang, former world no. 1, this year.

India had come up with a good show in the previous edition of the tournament in 2011, making it to the quarter-finals by beating Thailand in the group stage. But they lost to China despite Saina causing an upset victory over the then world No. 3 Wang Xin.

Comments
Topics mentioned in this article
PV Sindhu Saina Nehwal Jwala Gutta Football Badminton
Get the latest updates on ICC T20 Worldcup 2022 and CWG 2022 check out the Schedule, Live Score and Medals Tally. Like us on Facebook or follow us on Twitter for more sports updates. You can also download the NDTV Cricket app for Android or iOS.