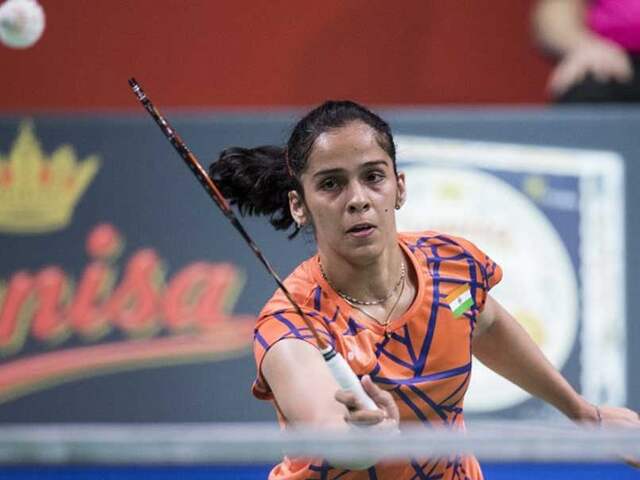 Saina Nehwal crashed out of the Malaysia Masters 2019 after losing 16-21, 13-21 to Carolina Marin of Spain in the semifinal match at the Axiata Arena, Kuala Lumpur on Saturday. The Indian shuttler was dominated by the three-time world champion Carolina Marin throughout the 40-minute contest in Malaysia. In the women's singles final, Marin will take on either Thai badminton player Ratchanok Intanon or Goh Jin Wei of Malaysia. Earlier, Saina Nehwal had stunned superior seeded Nozomi Okuhara 21-18, 23-21 in straight games to enter the semi-finals on Friday. The premier Indian shuttler Saina Nehwal clinched victory against her Japanese counterpart in a match that lasted for 48 minutes. Meanwhile, there was some bad news for Indian fans in the men's singles category as Kidambi Srikanth lost his quarterfinal to exit the tournament. The Indian, seeded seventh, lost 23-21, 16-21, 17-21 to 4th seed Son Wan Ho of South Korea. Seventh seeded Saina, who had a 8-4 head-to-head record against Okuhara before Friday, fought back from 9-15 and 14-18 down in the two games to extend her dominance over the second-seeded Japanese with a 21-18 23-21 win in a 48-minute quarterfinals at the Axiata Arena.

11:28 IST: That brings an end to the semifinal match between Saina Nehwal and Carolina Marin. Thank you for joining us for the live coverage from Kuala Lampur.

11:21 IST: Game Over! Saina Nehwal loses the semifinal 16-21, 13-21 to Carolina Marin of Spain. The India fought hard in the 40-minute contest but three-time world champion Carolina Marin gave her no chance to dominate in Malaysia.

11:19 IST: Carolina Marin takes 20-12 lead. Saina Nehwal has the last chance to save the game and the match.

11:14 IST: Service over! Saina Nehwal launches a counter attack and comes close to Carolina Marina. She still trails the game by 8-13.

11:07 IST: Unsuccessful again! Saina Nehwal has lost her first challenge of the game.

11:03 IST: The second game begins at the Axiata Arena.

10:50 IST: Break! Carolina Marin leads the game by 11-9 at the break. Saina Nehwal will look to fight back in the second-half to save the first game.

10:43 IST: Unsuccessful! Saina Nehwal loses her first challenge. But she leads the game by 4-2.

10:42 IST: CHALLENGE! First challenge of the play! Saina Nehwal opts for a review.

10:36 IST: India's Saina Nehwal and Carolina Marin of Spain walks out in the middle as the women's semifinal match is about to begin at Axiata Arena.

10:34 IST: In the other mixed-doubles semifinal, the Dutch pair of Robin Tabeling and Selena Piek are facing Dechapol Puavaranukroh and Sapsiree Taerattanachai of Thailand.

10:20 IST: Head-to-head! Saina Nehwal has defeated Carolina Marin five times and lost to the Spaniard as many times in the last 10 meetings.

10:17 IST: In the semifinals, the Indian shuttler will take on three-time world champion Carolina Marin of Spain.

10:12 IST: However, Kidambi Srikanth crashed out of the Malaysia Masters after losing 23-21 16-21 17-21 to fourth-seed Korean Son Wan Ho in the men's singles quarterfinals that lasted an hour and 12 minutes.

10:00 IST: Hello and welcome to our live coverage of the Malaysia Masters 2019 semifinal match between Saina Nehwal and Carolina Marin in Kuala Lampur.

The 28-year-old from Hyderabad, who had won the title in 2017 and was a runners-up in the 2011 edition, will face a tough test next when she faces three-time world champion Carolina Marin of Spain on Saturday.

Saina has defeated Marin five times and has lost to the Spaniard as many times in the last 10 meetings.

However, Srikanth squandered a one-game advantage to go down Son Wan Ho in the men's singles quarterfinals that lasted an hour and 12 minutes.

The women's singles match started on an even keel as both Saina and Okuhara fought hard, moving together till 9-9.

Okuhara registered six straight points to create a huge gap but Saina showed her mettle as she slowly erased the deficit and grabbed a 17-16 lead at one stage.

On Thursday, Nehwal had registered a comfortable 21-14, 21-16 win against Hong Kong's Yip Pui Yin in the second round.

Comments
Topics mentioned in this article
Saina Nehwal Carolina Marin Badminton Live Blogs
Get the latest Cricket news, check out the India cricket schedule, Cricket live score . Like us on Facebook or follow us on Twitter for more sports updates. You can also download the NDTV Cricket app for Android or iOS.