London Olympics quarterfinalist Kashyap lost to seventh seed Yun Hu of Hong Kong in a marathon match. Hu won the match 16-21, 21-13, 21-17 in one hour and 10 minutes to extend his career head-to-head against Kashyap to 2-0. 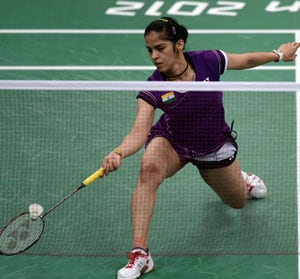 World No.3 shuttler Saina Nehwal reached the women's singles quarterfinals at the $1 million Korea Open Super Series Premier while compatriots P.V. Sindhu and Parupalli Kashyap faltered in the second round here on Thursday.

Saina defeated Mingtian Fu of Indonesia, for the fourth time in as many meetings, in straight games. The Hyderabadi won 21-16, 21-9 in 36 minutes at the S.K. Handball Stadium here in the first and most expensive tournament of the season.

Meanwhile, Sindhu lost to Thailand's Porntip Buranaprasertsuk 19-21, 13-21 in 31 minutes. This was Sindhu's first loss to the Thai World No.13 in three meetings.

London Olympics quarterfinalist Kashyap lost to seventh seed Yun Hu of Hong Kong in a marathon match. Hu won the match 16-21, 21-13, 21-17 in one hour and 10 minutes to extend his career head-to-head against Kashyap to 2-0.

"I should have won today but was unlucky. At 16-14 in the third game, when I was leading, the string of one racket broke and my smash went in the net. Next again, one more racket string broke at 17-16 and again a smash went out," Kashyap told IANS.

"Hu's a tricky player. In the next two points he hit good shots and won. Sometimes we aren't lucky. Anyway I'm happy I reached 11. I hope to better my performance at Malaysia Open next week," added the 26-year-old, who reached a career-best World No.11 Thursday.

It was an easy outing for the 22-year-old Saina, who exuded class in the match, winning 42 of the 67 points played.

The third seed dominated the match from the start taking an early lead of 8-3 in the first game. From there on, she did not look back and won the game on her first game-point.

In the second game, Mingtian matched Saina early on. But from 6-4, the Indian won 15 points to the World No.42's mere five.

Saina's deceiving cross-court smashes were effective as always, winning her six points to Mingtian's one. The Hyderabadi was also impeccable at the net as she won seven points to none of the Indonesian.

In the last eight clash, the Indian will be up against World No.26 Li Han of China, against whom Saina has a 2-0 head-to-head record.

Comments
Topics mentioned in this article
PV Sindhu Saina Nehwal Jwala Gutta Badminton
Get the latest updates on ICC T20 Worldcup 2022 and CWG 2022 check out the Schedule, Live Score and Medals Tally. Like us on Facebook or follow us on Twitter for more sports updates. You can also download the NDTV Cricket app for Android or iOS.