Saina Nehwal avenged her All England quarterfinal loss to Eriko Hirose with a thrilling three-game victory over the Japanese in the second round of the Wilson Swiss Open Super Series in Switzerland. 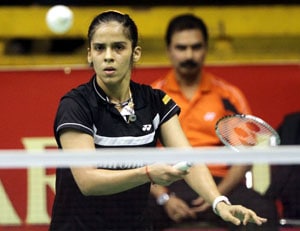 Saina Nehwal avenged her All England quarterfinal loss to Eriko Hirose with a thrilling three-game victory over the Japanese in the second round of the Wilson Swiss Open Super Series in Switzerland.

Second seed Saina beat All England finalist Eriko 21-15 17-21 21-11 in a match which lasted close to an hour to set up a clash with sixth seed Bulgarian Petya Nedelcheva in the quarterfinals.

Eriko had beaten Saina in the quarterfinals of the All England Championships last week and the Japanese got off to a good start in the first game in Switzerland.

She opened up a four-point lead at 9-4 in the second round but Saina caught up with her and moved ahead to pocket the opener.

Her back against the wall, Eriko came back strongly in the second game and moved neck-and-neck with Saina before surging ahead from 17-16 to equalise.

In the decider, world number four Saina didn't give any chance to her rival and shut the match with ruthless precision moving to 13-5 first and then holding on to it as Eriko crumbled.

In men's singles, Ajay Jayaram also reached the quarterfinals with a hard-fought 15-21 23-21 21-19 victory over 16th seed Hans-Kristian Vittinghus of Denmark in the third round last night. He will take on fourth seed Sung Hwan Park of Korean in the next round.

The Indian duo will next take on fourth seeds Chieh Min Fang and Sheng Mu Lee of Chinese Taipei in the quarterfinals. In women's doubles, there was disappointment in store for Jwala Gutta and Ashwini Ponnappa.

The Commonwealth Games gold medallist lost 16-21 12-21 to seventh seeds Shizuka Matsuo and Mami Naito in the pre-quarterfinals on Thursday.