Hyderabad Hunters will clash with Delhi Dashers in the first semi-final while Bengaluru will face Ahmedabad Smash Masters in the second semi-final on Saturday. 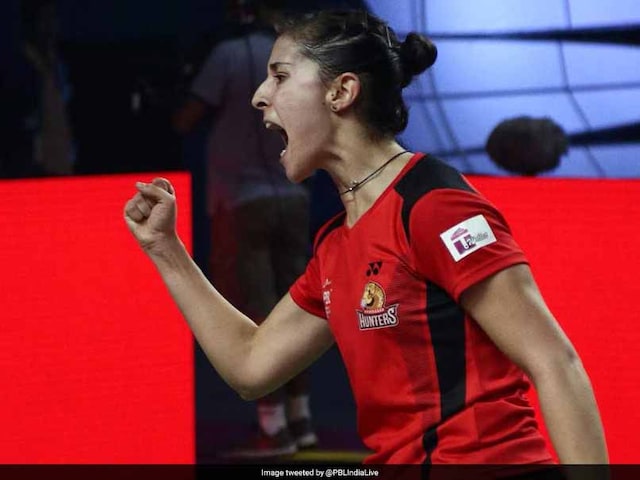 Hyderabad Hunters, backed by sterling displays from B. Sai Praneeth and Carolina Marin, beat Bengaluru Blasters to claim the top spot in the Premier Badminton League at the Gachibowli Indoor Stadium on Thursday. Playing their last league match in front of vociferous home fans, Hyderabad downed Bengaluru 5-0 and claimed six points to swell their tally to 20 points. Ahmedabad Smash Masters are in the second spot with 17 points, followed by Delhi Dashers on 15 points. Bengaluru slipped to the fourth spot with 14 points. With the battle for the title commencing on Friday, Hyderabad have emerged as strong contenders for the league honours.

They will clash with Delhi Dashers in the first semi-final while Bengaluru face Ahmedabad Smash Masters in the second semi-final on Saturday.

It was no easy going for Hyderabad on Thursday start as their mixed doubles pair and men's singles players Sai Praneeth and Lee Hyun Il were stretched to three games before winning their respective matches.

Marin, however, faced no such difficulty as she gets past Kirsty Gilmour 15-9, 15-7 in the women's singles.

Satwiksairaj Rankireddy and Pia Zebadiah Bernadet started off well against the Bengaluru duo of Manu Attiri and Sikki Reddy by winning the first game 15-6.

But the Reddys fought back to level the scores 14-15. In the decider, the Hyderabad duo took charge, supported by a vociferous crowd, and won 15-9 to help Hyderabad gain their first point.

Sai Praneeth faced a tougher opponent in Chong Wei Feng, who made the World No 16 sweat for every point throughout the match before winning 10-15, 15-7, 15-14.

In the decider, the left-handed Malaysian was down for the count at 12-14 but he pulled the level to take the game into the tie-breaker. Serving for the match, the World No 45 smacked a Praneeth return into the net to end his gallant fightback.

There was more disappointment for Bengaluru as they lost their Trump match as well with their men's doubles duo of Boe Mathias and Kim Sa Rang going down to Markis Kido and Yoo Yeon Seong 10-15, 15-11, 7-15.

The defeat meant they got a negative point and reduced their points tally to 14.

Bengaluru went in their last league match resting their leading men's singles player and World No1 Viktor Axelsen, keeping him fresh for the semi-finals.

(This story has not been edited by NDTV staff and is auto-generated from a syndicated feed.)
Comments
Topics mentioned in this article
Badminton
Get the latest Cricket news, check out the India cricket schedule, Cricket live score . Like us on Facebook or follow us on Twitter for more sports updates. You can also download the NDTV Cricket app for Android or iOS.