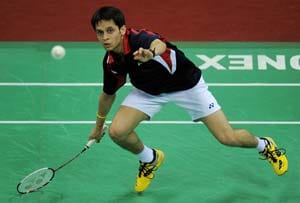 The world number 23 Indian recovered after dropping a game to see off Tien 12-21 22-20 21-14 in an hour and nine minute match in the men's singles competition. He will next take on China's Zhengming Wang in the quarters tomorrow.

Kashyap, who had beaten Tien in the London Olympics in August, could not get his act right in the opening game and was left doing the catch up job as the World No. 11 Tien closed it comfortably without being threatened much.

In the second game too, the Commonwealth Games bronze medallist was lagging 1-5 but he then made a strong come back, reeling off seven straight points to open up a five-point lead over Tien.

The Vietnamese caught up at 17-17 and moved to 20-20 but the Indian quickly notched up two points to roar back into the contest.

In the decider, Kashyap went into the break at 11-8 after fighting tooth and nail and though Tien stepped up the heat, the Indian kept his nose ahead and eventually cemented his place in the last-eight comfortably.

Among other Indians, Indonesian pair of Riky Widianto and Puspita Richi Dili proved too good for the young duo of Pranaav Jerry Chopra and Siki Reddy N, beating them 21-11 21-15 in just 24 minutes.