Olympic bronze medallist Saina Nehwal sailed into the second round of Malaysia Open after registering a straight-set victory over Singapore's Gu Juan in the women's singles event here on Wednesday. 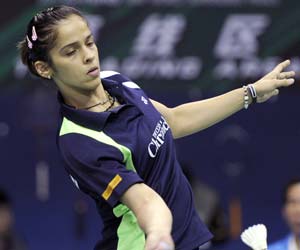 Olympic bronze medallist Saina Nehwal sailed into the second round of Malaysia Open after registering a straight-set victory over Singapore's Gu Juan in the women's singles event here on Wednesday.

However, India's rising star PV Sindhu went down fighting to a higher-ranked Tine Baun of Denmark in her first round match.

Saina, who has been given the top billing in the singles event, disposed off Juan's challenge 21-12 21-15 in a match that lasted 29 minutes at the Putra Stadium.

In the first game, the two matched each other to be tied at six points before Saina displayed some aggressive net play to open up a three-point lead to 9-6.

Thereafter she just sailed ahead to clinch the game comfortably.

The Hyderabadi, however, did not start well in the second game and was at one stage trailing 4-7 courtesy some brisk play the Singaporean.

But smashes from the 21-year-old Indian proved too much for the unseeded Juan to handle and she eventually lost the game and match.

Saina will next take on Hong Kong's Pui Yin YIP in the the second round.

Meanwhile, Sindhu fought hard before going down to the third seeded Baun in a three-set encounter, lasting 49 minutes.

Sindhu started off well as she surged ahead with a 8-5 lead. In fact, she managed to maintain a slight edge over her opponent to be placed at 10-8. But the Danish girl won four straight points to make it 12-10.

Then there was no looking back for Baun, who easily won the opening game.

A spirited Sindhu though showed a lot of character to fight her way back in the match by clinching the next game, 21-18 despite her rival having an upper hand till 18th point.

But the 17-year-old failed to get past the world number six in the deciding the game, losing it 17-21.

In the men's singles, India's Gurusaidutt RMV defeated compatriot Sourabh Varma 21-11 21-14 to move into the second round.

But in the men's doubles India's challenge ended as the duo of Pranaav Jerry Chopra and Akshay Dewalkar lost to Indonesian pair of Angga Pratama and Ryan Agung Saputra 21-12 21-16.

England's Heather Olver and Kate Robertshaw moved to the next round after Indian women pair of Aparna Balan and Siki Reddy retired in the second set. They had won the first set 21-11 and were 3-4 behind in the second when they withdrew from the match.

Comments
Topics mentioned in this article
PV Sindhu Saina Nehwal Jwala Gutta Badminton
Get the latest updates on ICC T20 Worldcup 2022 and CWG 2022 check out the Schedule, Live Score and Medals Tally. Like us on Facebook or follow us on Twitter for more sports updates. You can also download the NDTV Cricket app for Android or iOS.