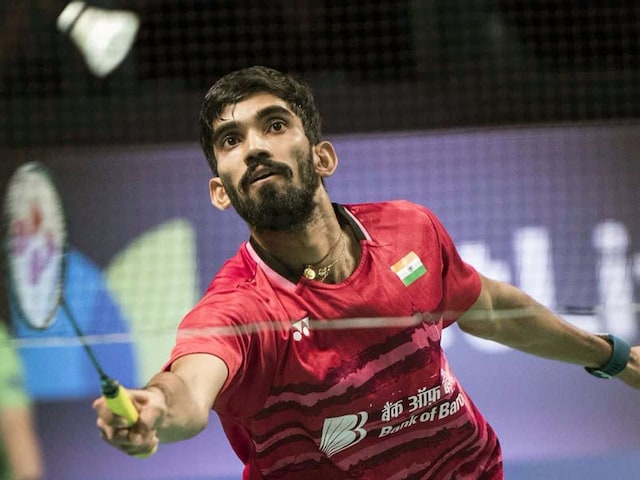 India's Kidambi Srikanth beat Japan's Kenta Nishimoto to win the French Open Super Series title on Sunday. Srikanth displayed some great net play and was aggressive with his smashes to breeze past his opponent 21-14, 21-13 in just 34 minutes. By doing so, the 24-year-old shuttler became only the fourth male player in the history of the game to win four singles Superseries titles in a calendar year after Lin Dan, Lee Chong Wei and Chen Long. Apart from this, Srikanth became the first Indian male to lift the French Open Superseries title and also clinched his second Superseries title in two weeks, the last being the Denmark Open.

20:26 IST: Srikanth is just three points away from victory!!

20:24 IST: Srikanth is edging closer to his fourth Superseries title in a calendar year, leads 16-8.

20:14 IST: Srikanth misses his placement and Nishimoto gets his first point of the game, trails 1-4.

20:11 IST: Srikanth takes a 1-0 lead after winning the first game 21-14 against Nishimoto in just 16 minutes. Looks like Srikanth is in a hurry to finish this game.

20:08 IST: At the moment Srikanth is enjoying a big six-point lead over his opponent,six-point

20:04 IST: Srikanth is beautifully mixing up his shots to maintain a comfortable lead in the first game.

19:54 IST: Srikanth serves and wins the first point of the game.

19:40 IST: We are just minutes away from Srikanth's match. Stay tuned folks!

19:30 IST: In the mixed doubles event, Tontowi Ahmad and Liliyana Natsir of Indonesia have won the first set 22-20 against Zheng Siwei and Chen Qingchen of China.

19:10 IST: Hello and welcome to the live blog of the French Open Superseries final match between Kidambi Srikanth and Kenta Nishimoto.

In the first game of the men's singles semis, Prannoy dominated the proceedings as Srikanth gave away easy points. Prannoy held a comfortable lead over his compatriot throughout the match. Srikanth tried fighting back but to no avail as Prannoy won the first game 21-14.

In the second game, the Guntur shuttler had a slight edge over his opponent, but Prannoy bounced back with quick points to take the lead. At the break, Srikanth trailed Prannoy 10-11. The rest of the game saw both the Indians fight neck-and-neck before Prannoy took a two-point lead. However, the 24-year-old had other plans as he fought valiantly to level the match 1-1 by winning the game 21-19.

Going in the third and decisive game, Srikanth looked confident as he held a comfortable lead. But then again Prannoy earned quick points and left Srikanth trailing. Most of the third game transpired in the same fashion with the same result as well. Srikanth took important points at crucial junctures of the game to throw Prannoy off his game and enter the final of the tournament.

Comments
Topics mentioned in this article
Kidambi Srikanth Badminton Live Blogs
Get the latest Cricket news, check out the India cricket schedule, Cricket live score . Like us on Facebook or follow us on Twitter for more sports updates. You can also download the NDTV Cricket app for Android or iOS.