Srikanth, who became the first Indian and only fourth men's singles player in the world to win four Super Series titles in a calendar year, said not a few but many players, including him, are capable of winning top tournaments these days. 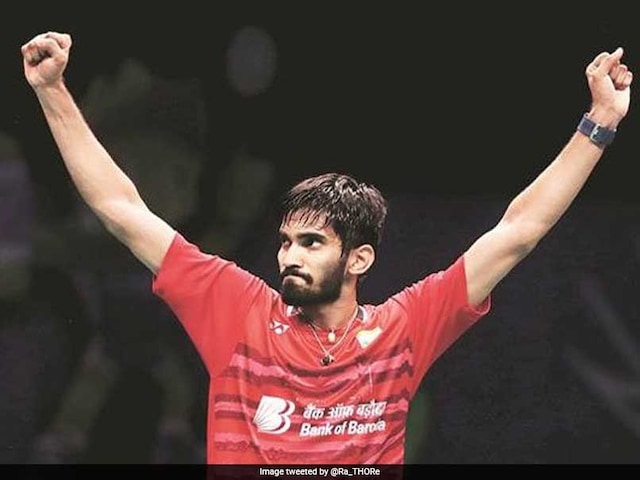 Srikanth was felicitated at the P Gopichand Academy after his recent victories.© PTI

In the best form of his life after winning four Super Series titles in five months, star India shuttler Kidambi Srikanth on Tuesday said that the days of domination of Lin Dan or Lee Chong Wei are over and the tournaments are more wide open than ever.

Srikanth, who became the first Indian and only fourth men's singles player in the world to win four Super Series titles in a calendar year, said not a few but many players, including him, are capable of winning top tournaments these days.

"For a long time I think (Malaysian) Lee Chong Wei and (China's) Lin Dan have dominated badminton. And now it has become more open. Me, Viktor (Axelsen) and even other Indian players are winning tournaments. It has become more wide open and it's always good for the sport when you have so many champions," he told reporters here.

"These days, there are many players who are playing really well and anybody can beat anyone on their given day. So, it's always important to be at your best against anyone," he said.

Asked if he thinks Lee Chong and Lin Dan are nearing the end of their careers, he said, "I can't really say that's their end. They have played at the highest level and really have the experience to come back. One can't really take them lightly. Lin Dan played in the final of World Championship. They definitely are tough every time you play them. But, we need to believe in ourselves that we can do well."

Srikanth might be inching towards the World No. 1 sport after winning the French Open last weekend but he said he was not thinking too much about the rankings.

"To be frank I don't really think too much about the rankings. I really did well in the last eight to ten months. I want to just keep playing tournaments and enjoy playing the sport," he said.

Asked if he will become World No. 1 if he wins the upcoming China Open, Srikanth said, "That's how it is. If you do consistently well, rankings do follow and I don't want to run behind the rankings. I really want to play well in the tournaments."

Srikanth said he will be competing in the Nationals (next week), besides the China and Hong Kong Open and the BWF World Super Series Finals in Dubai in December.

"I am very happy now. All the four Super Series are different. After I won the India Open in 2015, it took a long time to win the Indonesia title," said Srikanth, who beat Axelsen in men's singles quarterfinals in the Denmark Open Super Series Premier.

He said match against compatriot H S Prannoy in the French Open was also a tough one.

"I was really thinking to play well because I played a great match against him (Viktor) in Japan Open but I lost with by just two-three points. I didn't want that to happen. I wanted to do better and luckily I was able to do it. I am happy with the way I played that quarter final match. He has been in a great form and that win gave me a lot of confidence," Srikanth said.

"Going into the French Open, it was a tough draw and with top players losing in initial rounds, there were so many thoughts running in my mind, but still I told myself that I will take it round-by-round. I fairly did well at the French Open," he said.

Comments
Topics mentioned in this article
Badminton Kidambi Srikanth
Get the latest Cricket news, check out the India cricket schedule, Cricket live score . Like us on Facebook or follow us on Twitter for more sports updates. You can also download the NDTV Cricket app for Android or iOS.