Jwala Gutta and Ashwini Ponnappa's participation in the women's doubles event at the Denmark Open Super Series is still not confirmed. 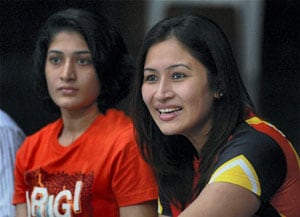 India's top doubles shuttler Jwala Gutta on Friday said she and her partner Ashwini Ponnappa have not yet received any communication from the Badminton Association of India (BAI) on whether or not they would be playing in the Denmark Open Super Series starting Tuesday. The Delhi High Court had on Thursday directed BAI to allow her to participate in tournaments and suspended the life ban on her. (Read: Jwala Gutta thanks well-wishers for standing behind her)

After the recommendation of life ban by BAI's disciplinary committee for delaying an Indian Badminton League (IBL) match, Jwala's entry was withdrawn from the Denmark Open by the BAI.

However, the court directed the association to forthwith withdraw the communication sent to the organisers of the tournament on withdrawing her name, and permit her to participate.

Jwala told reporters here that there was no official communication so far from BAI. "They should have told me by now. If I don't get visa today that means I can't play the tournament as Saturday and Sunday are holidays for the Danish embassy," she said.

Ashwini said she was disappointed as they were looking forward to making a comeback with the Denmark Open.

They hoped that their entries would be sent for the French Open and Bitburger Open scheduled later this month. "We have also sent entries for China and Hong Kong next month. I hope that they will send our entries," said Jwala.

"I hope that justice will be done and Ashwini and I get to play in future. There are important tournaments coming up next year. We are defending champions of the Commonwealth Games, which is going to happen next year. We need to play major tournaments before that," she added.

She said the BAI withdrew her from Japan Open last month without intimating her and also threw her out of the team.

"Ashwini is in the Indian team but I am not which sounds really funny. Still I did not complain as long as I get to play. I booked all my tickets and hotel. I spent so much money and they withdrew my name from Denmark. I don't know whether they withdrew our names from French and Bitburger as well."

Claiming that she had done nothing wrong, Jwala said she was not scared when she first came to know of the recommendation for life ban. "This has not scared me. I will continue to play. Nobody on this earth can stop me from playing unless I want to quit. It is my right. Nobody can snatch my right," she said.

Jwala said she tried her best and spoke to BAI president Akhilesh Das Gupta and also chief national coach Pullela Gopichand "but nobody was willing to understand".

"I was not supposed to talk to media but before they gave me any notice they talked to media and said we will ban her for life which was uncalled for. I have not committed any crime. I didn't dope, I have not doing any match fixing. I didn't kill anybody. I don't understand what this life ban is for."

She said while she was happy that her coach S.M. Arif and former coach Vimal Kumar backed her, there was no word of encouragement from Gopichand.

Comments
Topics mentioned in this article
Badminton Jwala Gutta
Get the latest updates on ICC T20 Worldcup 2022 and CWG 2022 check out the Schedule, Live Score and Medals Tally. Like us on Facebook or follow us on Twitter for more sports updates. You can also download the NDTV Cricket app for Android or iOS.