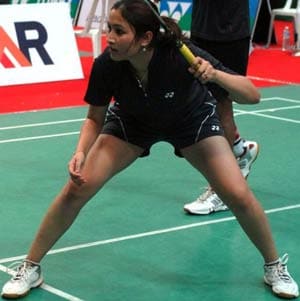 Elsewhere in the Tokyo Metropolitan Gymnasium, China's Xin Liu ousted Tanvi Lad from the women's singles second round by coming out victorious 21-18, 21-12 in 42 minutes.

Ashwini with Tarun Kona will play their mixed doubles second round match later in the day against local pair Kenichi Hayakawa and Misaki Matsutomo while Sourabh Verma will take on Japanese fourth seed Kenichi Tago in the men's singles Round 2.

Sponsored by Vuukle
Comments
Topics mentioned in this article
Badminton
Get the latest updates on Fifa Worldcup 2022 and check out  Fifa World Cup Schedule, Stats and Live Cricket Score. Like us on Facebook or follow us on Twitter for more sports updates. You can also download the NDTV Cricket app for Android or iOS.