Pranaav Chopra and Sikki Reddy, who had clinched the Syed Modi Grand Prix Gold title at Lucknow this year, squandered the opening game advantage to go down 21-14, 15-21, 19-21. 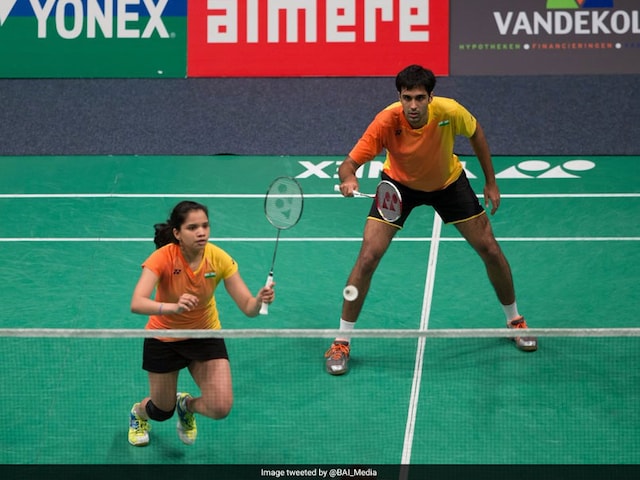 Pranaav Chopra and Sikki Reddy fought valiantly in the mixed doubles semis but it was not enough.© Twitter

India's campaign ended at the Japan Open Superseries after the mixed doubles pair of Pranaav Jerry Chopra and Sikki Reddy suffered a narrow loss in the semifinals on Saturday morning. Pranaav and Sikki, who had clinched the Syed Modi Grand Prix Gold title at Lucknow this year, squandered the opening game advantage to go down 21-14, 15-21, 19-21 to the local pair of Takuro Hoki and Sayaka Hirota.

During the 60-minute battle, the Indian pair fought hard, managing a 7-4 lead early on which was erased by the Japanese combo quickly at 9-9.

But the Indians moved ahead with a short burst of points to eventually grab the opening game comfortably.

Takuro and Sayaka changed gears in the second and led 4-1 before entering the break at 11-8. Pranaav and Sikki reduced the deficit to 13-15 before the Japanese combo walked away with the game to bounce back into the contest.

The decider turned into a roller-coaster ride initially as both teams fought tooth and nail till 8-8 when the Japanese combo opened up a 13-9 lead. The hosts kept their nose ahead despite the Indians breathing down their neck.

In the end, Takuro and Sayaka managed to grab the one point needed to seal the issue at 20-19.