India now has no option but to field a depleted side as far as the women's team is concerned, as earlier even the doubles specialist Jwala Gutta had withdrawn from the meet. 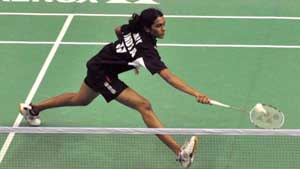 With Olympic bronze medallist shuttler Saina Nehwal having pulled out of the Sudirman Cup Mixed team championship, P V Sindhu will spearhead the Indian challenge in the women's singles event.

Saina opted out of the event, to be held in Kuala Lumpur from May 19 to 26, after she failed to recover fully from a hairline fracture on the small toe of her left foot.

The world No 2, Saina had suffered the fracture before the Sunrise India Open Super Series last month and aggravated the injury during the tournament, where she had crashed out in the second round.

"It's a small finger of leg which got fractured during the India Open. It's just a hairline fracture, but I have still not recovered from it," Saina said.

India now has no option but to field a depleted side as far as the women's team is concerned, as earlier even the doubles specialist Jwala Gutta had withdrawn from the meet.

With hardly any time left to name a replacement, the Malaysian Grand Prix Gold champion, world no. 13 Sindhu will shoulder the responsibility all alone in women's singles.

India, placed in Group A along with defending champions China and Indonesia, will have to beat at least one of them to advance to the next stage.

They will be starting their campaign against China on Sunday. In the men's category, the Indian hopes would rest on world no. 11, Parupalli Kashyap's shoulders.

The week-long tournament will have a total of 30 teams competing at the Putra Stadium in Bukit Jalil.

Comments
Topics mentioned in this article
Jwala Gutta PV Sindhu Saina Nehwal Football Badminton
Get the latest updates on ICC T20 Worldcup 2022 and CWG 2022 check out the Schedule, Live Score and Medals Tally. Like us on Facebook or follow us on Twitter for more sports updates. You can also download the NDTV Cricket app for Android or iOS.