Hope Thomas Cup Wins Does To Badminton What 1983 WC Did To Cricket, Says Coach Vimal Kumar

Indian men's badminton team coach Vimal Kumar on Sunday hoped the historic Thomas Cup triumph would do the same to the country's shuttle sport what the 1983 World Cup win did to cricket. 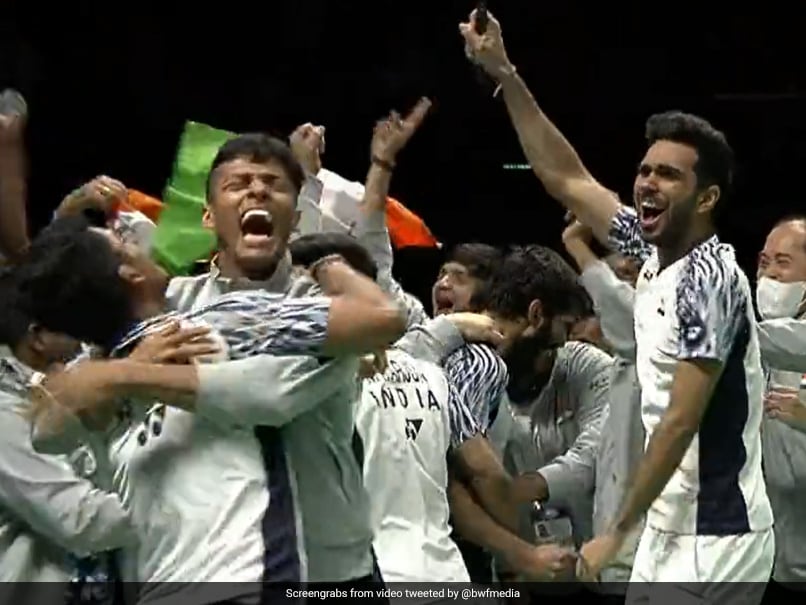 Indian men's badminton team coach Vimal Kumar on Sunday hoped the historic Thomas Cup triumph would do the same to the country's shuttle sport what the 1983 World Cup win did to cricket. In beating 14-time winners Indonesia 3-0 in the summit showdown in Bangkok, Lakshya Sen, Kidambi Srikanth and the doubles duo of Chirag Shetty and Satwiksairaj Rankireddy conjured one of the most remarkable feats in the country's sporting history.

It was no surprise that Kumar was unable to describe the historic victory.

"I have no words to describe it, we always had hopes but the way the players played, they just put up a performance out of the blue. It was really fantastic. We had such a poor record against Indonesia and to win 3-0 is incredible," Kumar told PTI from Bangkok.

The unassuming coach, who goes about his job quietly, added, "In 1983, when India won the cricket World Cup, the euphoria was something else but cricket was always a very popular sport and I hope with this performance, now badminton can also become so popular." "It has always been about individual achievements but this was a team performance and I hope the popularity of the sports goes up from here on." Kumar rated this as Indian badminton's biggest ever achievement.

"I will rate this the biggest ever. Of course, Prakash and Gopi winning All England, Sindhu winning, all great achievements but as a team what we have done, we couldn't deliver as a team (earlier). You call one a badminton nation when you win a team championships, so I will rate it as the best.

"I am happy that I could see this in my life time. It is a dream come true for me." India, who has never reached the last-four stage since 1979, ended up getting the better of formidable Malaysia and Denmark en route to the summit clash in this edition of the tournament.

Needless to say, the triumph on the day when it mattered the most sparked off wild celebrations in the Indian camp, less than 48 hours after they rejoiced their win over Denmark.

"I have never seen them so enthusiastic, it is a achievement of pure team spirit which I haven't seen in the past. We always had good players but priority was on individual players and tournaments. We have a balanced team and it did the trick.

"In each match what the doubles players have done is amazing, earlier we were dependent on singles but Satwik and Chirag pulled out all the pressure matches, so lot of credit to Lakhsya, Srikanth and HS Prannoy, for they delivered when it mattered. I am fortunate, lucky coach to be here with them," Kumar said.

"It is the best achievement of Indian badminton, and I feel so proud to be part of this historic team. It is a fantastic bunch of players." Vimal also credited Srikanth and Prannoy for playing an important role in motivating the players.

"I will give a lot of credit to these guys, they would sit down with players, speak to them and motivate each other.

"When the older player takes initiative and motivates the players, their comforting words make a big difference. They firmly believed they will be able to win and that belief turned things for us. It was a fantastic team effort. Coaches worked hard, so overall this is a fantastic effort." Asked if Srikanth has regained his mojo after struggling for 3-4 years since his exploits in 2017, Vimal said: "Yes, I think so, we were seeing glimpses of it in World Championships, he was showing progress but for three years he didn't do well. In 2017 he was awesome, but very happy to see him coming back. He has become a great motivator for the young players." After being off-colour against Malaysia and Denmark, Lakshya Sen finally delivered with a three-game win over Anthony Ginting.

Vimal said Lakshya had food poisoning after he ate something in Bangalore airport.

"..whole flight he was sick. We forced him to play against Germany and after that he was given rest, but we had to field him so it was tough for him.

"He got better every day, and today against Ginting he had beaten him in Germany but I thought he would lose after he got a bad mauling in the first game but he made a comeback, I am really proud of him for what he did today." Vimal said this performance will spur the players to do well in the upcoming major events such as the Commonwealth Games and the Asian Games.