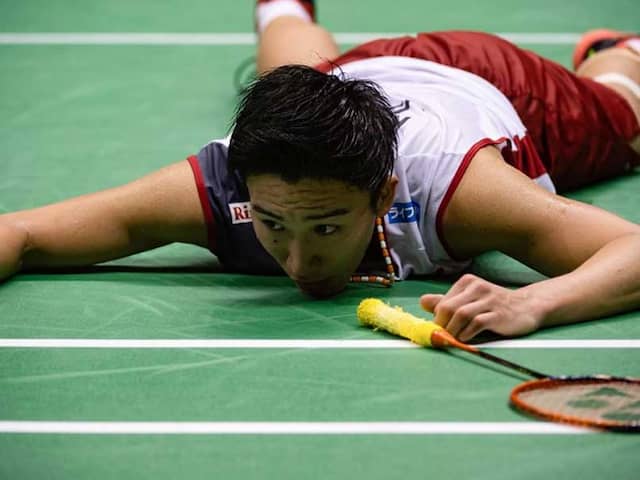 Top-ranked Kento Momota was sent packing in the Hong Kong Open semi-finals on Saturday after a stunning semi-final loss to South Korean Son Wan-ho. Son triumphed 18-21, 21-16, 21-19 in an exhausting 89 minutes -- the longest match of the tournament so far -- after seeing off a late boost from the exhausted Japanese star in the decider. Momota led through the first game but slipped for long enough for his opponent to level at 17-all after conceding six consecutive points. He kept the edge after the interval before Son broke into the lead at 12-11 with a gravity-defying let after a tap at net.

Momota evened with a backhand after springing back from prone position after a stumble but couldn't stop the sixth seed from powering ahead.

Son led through most of the third game but Momota kept at his heels, drawing level five times before an agonising miss on match point.

Momota has been in searing form since his return to the sport after a gambling scandal saw him slapped with a 12 month ban.

But the 24-year-old has had a slow run through the Hong Kong tournament. He beat Chinese great Lin Dan in the first round but complained of burnout after his first three matches all went to three games.

Son, 30, is through to his first top-flight singles final since his win at the 2016 Korea Masters.

In the women's singles Ratchanok Intanon bounced back from a first game wipeout to win her match against South Korea's Sung Ji-hyun 10-21, 21-11, 21-17.

The former world champion stayed well clear of her opponent through the second game as Sung struggled to catch up to the third, levelling at 12 and 15 before succumbing to Intanon's powerful smash.

One more tie at 17 was enough to focus the Thai, who swept the last four points of the decider.

"Sometimes I played slow but it's not like I have no power," she said afterwards.

"Mentality is more important... Sometimes it wasn't my game but I tried to more enjoy the game. Today I feel like I controlled the pressure."

Tenth-ranked Sung had a strong run through the tournament, knocking out seeded opponents PV Sindhu of India and China's He Bingjao.

Ratchanok, who blitzed second-ranked Akane Yamaguchi 21-9, 21-16 in the quarter-finals, will face either Taiwan's world number one Tai Tzu-ying or Japan's Nozomi Okuhara on Sunday.