Satwiksairaj Rankireddy-Chirag Shetty stormed into the final of French Open. 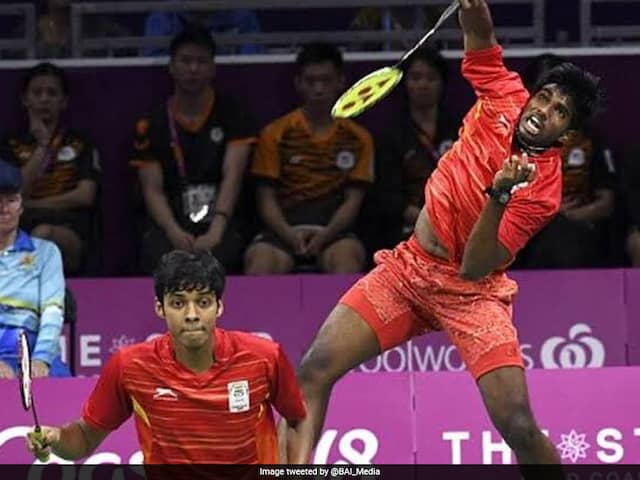 Satwiksairaj Rankireddy-Chirag Shetty booked a place in the final of French Open.© Twitter

Satwiksairaj Rankireddy-Chirag Shetty defeated Hiroyuki Endo-Yuta Watanabe 21-11, 25-23 to reach men's doubles final in French Open on Saturday. Satwiksairaj Rankireddy-Chirag Shetty were leading 11-5 at mid-break in the first game. The Indian pair took the first game 21-11. Satwik and Chirag were under pressure early in the second game but came back strongly to lead 11-8 at the mid-break. The Japanese pair fought hard in the second game and saved multiple match points but the Indian duo finished the match by taking the second game 25-23.

On Friday, PV Sindhu and Saina Nehwal were knocked out as they lost their respective quarterfinal matches. PV Sindhu lost to top-seeded Tai Tzu Ying in a thrilling contest while Saina bowed out of the tournament as she lost to An Se Young in straight games.

The Indian duo, who had claimed their maiden Super 500 title at the Thailand Open in August this year, shocked World No 8 Danish pair of Kim Astrup and Anders Skaarup Rasmussen 21-13 22-20 in a thrilling quarterfinal match that lasted 39 minutes.

Satwik and Chirag will now face the top-seeded pair of Marcus Fernaldi Gideon and Kevin Sanjaya Sukamuljo in the final on Sunday.