World no. 5 Saina Nehwal has got an easy draw at the All England Badminton Championships starting on Tuesday. 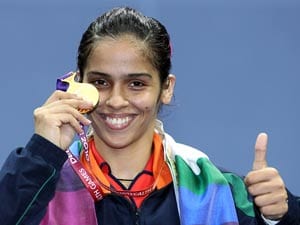 World no. 5 Saina Nehwal has got an easy draw at the All England Badminton Championships starting on Tuesday.

Saina who was a semi-finalist last year has only got 1 Chinese player in the draw, that being world no.2 Wang Yihan. Although, there are reports that Yihan may have to opt out due to an injured knee ligament.

Since her semi-final exit last year, Saina has won 5 major titles, including the Commonwealth gold andÂ  reached a career best ranking of no. 2 in 2010. If Saina wins this title, she'll become the first Indian woman player to win the coveted trophy, considered as the epitome of a shuttler's success and also known as the 'Wimbledon of badminton'.

"It is a dream for anyone to win the All England. In fact, my semifinal finish last year helped me win five major titles. I hope I'll put up a better show this year," Saina said.

Prakash Padukone, the former World No. 1 who had won the All England Championships in 1980, hailed Saina as the best ever Indian shuttler.

Though she refuses to accept it, Saina has got the best possible draw with Yihan being the only big hurdle in her half. The news that Yihan had injured her knee ligament would only bolster Saina's chances. The cross-border rivals are expected to meet in the quarters. With defending champion Tine Baun of Denmark already having pulled out due to a heel injury, if Wang also opts out, Saina's first big test could come only in the final.

But the world No. 5 says getting past the first two rounds will be quite tough. Saina will open against Seung Hee Bae of Korea and is likely to face Tai Tzu Ying of Chinese Taipei in the second round. "Bae is very athletic on court. She picks up everything and makes it tough for the opponents. Ying is a classic player with all kinds of strokes. On paper it may appear easy, but for me both are very tough opponents. I have to produce my best to beat them," Saina said.

Saina had missed three tournaments because of issues regarding her fitness and was knocked out in the second round of the Korean Super Premier by Ying. The Hyderabadi shuttler however, says there are no fitness concerns now. "My ankle has completely healed. I am in great shape now. I worked hard for the last four weeks and am ready to give my best," she added.