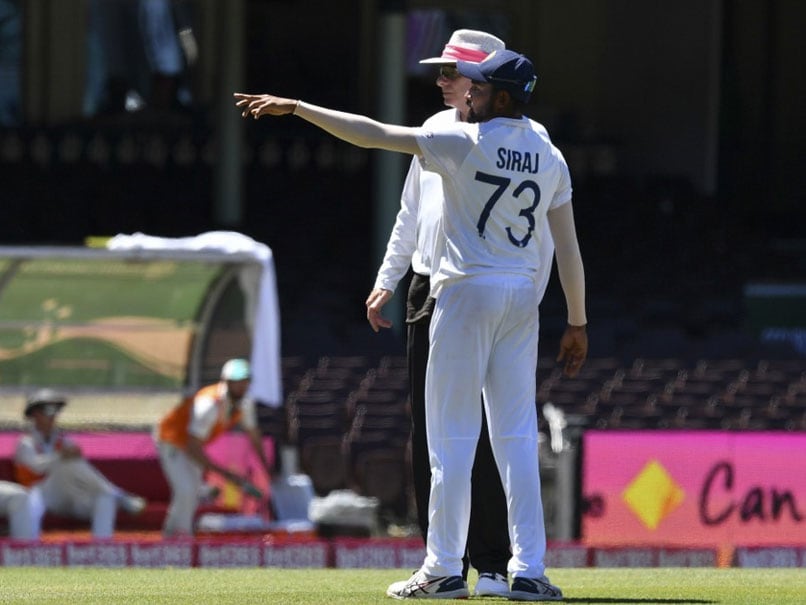 Mohammed Siraj was subjected to racial abuse on Sunday by a group of spectators in Sydney.© AFP

India pacer Mohammed Siraj was called a "Brown Dog" and "Big Monkey" in a series of racist slurs hurled by a group of Australian spectators, who were ejected from the Sydney Cricket Ground during the third Test on Sunday, a BCCI official has alleged. Siraj and his senior teammate Jasprit Bumrah were also subjected to racist slurs on Saturday, something that the Indian team management officially reported to ICC Match Referee David Boon. "Siraj was referred to as 'Brown Dog' and 'Big Monkey' both of which are racist slurs. The matter was immediately brought to the notice of on-field umpires. They were constantly abusing Bumrah too," a BCCI source told PTI on conditions of anonymity.

On Sunday, during the 86th over of the Australian second innings, Siraj was seen walking from his position in the deep and talking to the square leg umpire before the straight umpire and other senior players joined the discussion.

Play was halted for close to 10 minutes before stadium security as well as New South Wales Police checked in to the relevant stand from where the nasty comments were being hurled at.

After speaking to the spectators in the adjoining area, the police evicted six supporters, who are currently in the custody of New South Wales Police.

It is learnt that on Saturday, the Indian team brought the matter to the notice of match officials only after the third day's play ended and by then the mischief-mongers had fled the stadium.

"Actually, the players didn't want to lose focus during the proceedings and decided that the matter would be reported only after the day's play was over. However, umpires have told us that moment anything of that nature happens, the players should report immediately," the source added.

Cricket Australia has promised strongest action against the offenders and also unreservedly apologised to the visiting team.

India Cricket Team Australia vs India 2020-21 Cricket
Get the latest updates on IPL 2021, check out the IPL 2021 Schedule and Indian Premier League Live Score . Like us on Facebook or follow us on Twitter for more sports updates. You can also download the NDTV Cricket app for Android or iOS.