Oscar Pistorius Is Broken, Should Not be Jailed, Says Psychologist

Oscar Pistorius killed Reeva Steenkamp, a model and law graduate, in the early hours of Valentine's Day in 2013, saying he mistook her for an intruder when he fired four times through the door of his bedroom toilet 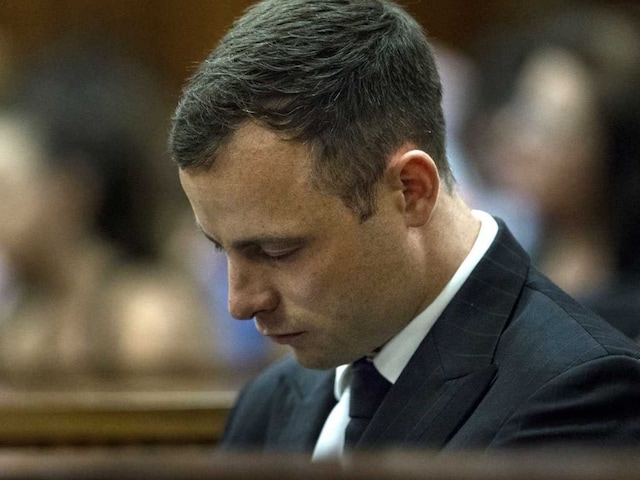 Oscar Pistorius was released from jail last October to live under house arrest at his uncle's mansion in Pretoria after serving one year of his five-year sentence for culpable homicide.© AFP

Oscar Pistorius is a "broken" man who should be hospitalised rather than jailed, a South African court heard Monday, as the Paralympic athlete awaits sentencing for the murder of his girlfriend three years ago.

The double-amputee killed Reeva Steenkamp, a model and law graduate, in the early hours of Valentine's Day in 2013, saying he mistook her for an intruder when he fired four times through the door of his bedroom toilet.

Looking tired and sometimes resting his head in his hands, the 29-year-old "Blade Runner" attended the first day of the sentencing hearing at the High Court in Pretoria along with members of his family.

"He has developed a serious psychiatric condition which has become worse in the past two years," psychologist Jonathan Scholtz, called by the defence, told the court.

"Further imprisonment would have a detrimental effect on him as a person, considering his current clinical condition."

"Currently he is not able to testify. His condition is severe," he said.

In March, Pistorius's lawyers failed in their legal bid to reverse a Supreme Court of Appeal judgement that upgraded his original conviction from culpable homicide -- the equivalent of manslaughter -- to murder.

The original trial judge Thokozile Masipa is expected to pass a new sentence after hearing arguments from both prosecution and defence.

Scholtz added that Pistorius "has almost given up, his spirit seems broken" and he should be sent to hospital.

"(He is) a vulnerable, anxious man, extremely uncertain of himself without his prostheses."

Pistorius faces a minimum 15-year jail term for murder, but his sentence could be reduced due to time already spent in prison and mitigating factors, including his disability.

Steenkamp's parents were both in court on Monday, and her father Barry may take the witness stand to ask the court to impose a lengthy punishment.

If he does, it will be the first time one of Steenkamp's parents has testified in the case.

Pistorius has shunned the media during years of intense coverage since Steenkamp's killing, but his family have revealed that he has given his first interview, due to air on British broadcaster ITV later this month.

The interview drew a sharp attack from state prosecutor Gerrie Nel, who said it proved that Pistorius was capable of testifying.

"He would rather give his version to the TV than to court," Nel said.

Pistorius was released from jail last October to live under house arrest at his uncle's mansion in Pretoria after serving one year of his five-year sentence for culpable homicide.

If he is sentenced to more than five years this time around, he will have to serve at least two-thirds of the term before he qualifies for parole.

Since being convicted of murder, Pistorius has been on bail and allowed to leave his uncle's house at set times, but not travel further than 20 kilometres (12 miles) without permission.

The case -- held in the same courtroom as the original trial -- was scheduled to last one week.

Pistorius has always denied killing Steenkamp in a rage and, during his dramatic seven-month trial in 2014, sobbed in the dock as details of his lover's death were examined in excruciating detail.

The year before he killed Steenkamp, Pistorius became the first double-amputee to race at Olympic level when he appeared at the London 2012 games.

He has since lost his glittering sports career, lucrative contracts and status as a global role model for the disabled.

The court adjourned until Monday afternoon, after exchanges when it was revealed that while in prison Pistorius caught an infection in his leg stumps after being forced to shower on a concrete floor.

About 20 Pistorius supporters rallied outside the court, saying he should be treated leniently.