Just days before Sunday's kick-off in the eastern city of Kolkata, the Indian Super League (ISL) football tournament, which has lured a host of former international stars, is facing scepticism. 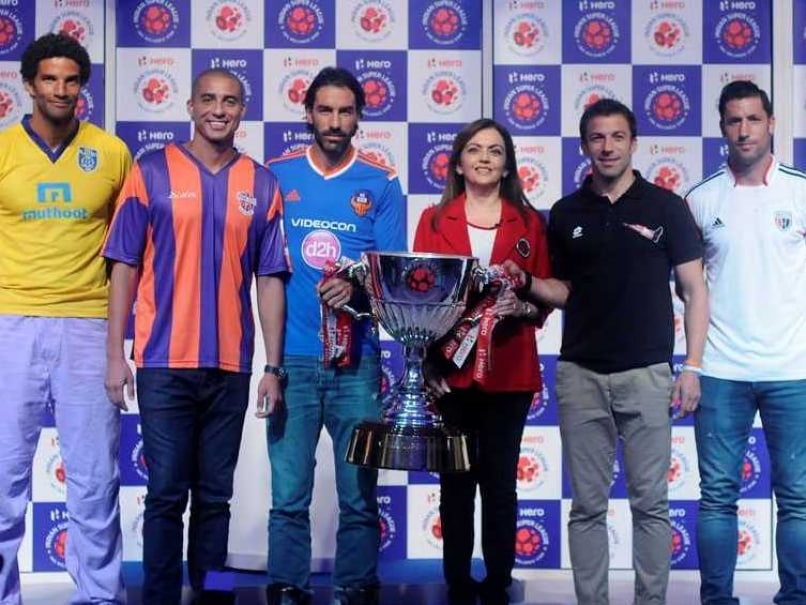 ISL founding chairperson Nita Ambani with the trophy at the launch of the Indian Super League.© NDTV
Kolkata:

With Bollywood stars, cricketing greats and a slick marketing campaign, India's new football league is gunning to become the next big thing in sport.

But just days before Sunday's kick-off in the eastern city of Kolkata, the Indian Super League (ISL), which has lured a host of former international stars, is facing scepticism.

Some question the calibre of the league's top players, who include veterans like the controversial French striker Nicolas Anelka and ex-Arsenal midfielder Freddie Ljungberg.

Others say the tournament cannot hope to gain traction in a cricket-obsessed country whose sporting authorities have long failed to cultivate passion for the "beautiful game".

"They are has-beens, definitely not at the pinnacle of their careers," said Dave Chattaway from British-based Brand Finance, referring to the marquee players. (Read: ISL Will Take Indian Football to Next Level: Davide Colomba)

"You can't wheel out a well-known player for the last 20 minutes of a game and let them kick the ball a bit," added Chattaway, who evaluates sports leagues worldwide.

"It has to be top-level sport, fiercely competitive, to attract the crowds," he said, adding that he hoped the league would be a success. (Also read: Bollywood heartthrob Hrithik Roshan joins FC Pune City as Co-owner)

Cricket captain Mahendra Singh Dhoni announced this week he has also signed as a co-owner, because he wanted to help create "world-class football" in India.

Owners and organisers are eyeing India's 1.25 billion population, especially its rising middle class and huge numbers of youth, for a windfall in the long term. Not only are they hoping crowds will flock to stadiums, but also buy merchandise and lure more sponsors.

Although cricket dominates the back pages, the English Premier League and other football competitions in Europe are a major driver behind the growth of satellite TV here.

Former Manchester City and Sunderland boss Peter Reid, who is managing the Mumbai team, said the potential for football's popularity in India was huge, pointing to the game's growth in the US.

"I know India's a cricket-mad nation and so am I (cricket-mad), but there's room for football as well without a doubt," Reid told reporters last week.

Ljungberg, 37, who announced he was coming out of retirement to lace up for the Mumbai team, said he hoped to help cultivate the game at the grass roots level.

"How they sold it to me is that young children, they so much want to play football but at the same time it's difficult to find facilities etc (in India)," said the Swede.

The ISL cannot compete with the English Premiership for quality, "but we (will) try to play as good as we can," said Ljungberg, who has also played in Japan's J-League.

The format -- attracting Bollywood and cricket stars and marquee players -- has proved successful in the IPL and in home-grown sport kabaddi, and to a lesser extent India's hockey league.

But some think the task this time around is much tougher. Passion for football has long existed in pockets of India, including in former Portuguese colony Goa, and domestic competitions have attracted some reasonable crowds.

On a visit to India in 2007, FIFA president Sepp Blatter said India was the sleeping giant of world football.

But India's national side languishes in the world rankings at 158, below even war-torn Syria and Afghanistan, and few can name its captain.

Novy Kapadia, the country's best known football writer, blamed a lack of funding for stadiums and training grounds, and for youth development to harness the sport's potential.

"There will be initial curiosity for sure (for the ISL) but whether that curiosity turns into popularity and can be sustained is the big question," Kapadia told AFP.

India played Palestine this week in an international friendly on the subcontinent, which saw the home side lose and the national coach later quit. But the match received scant media attention.

"No one would telecast the match. India the sleeping giant remains sleeping," Kapadia said.

In the heart of Kolkata this week, the ISL brought a mixed response from groups of youths playing cricket on green fields.

Nadir Akhtar Khan, 18, said he was looking forward to Sunday's Kolkata versus Mumbai opener, although he couldn't name any of the players.

"Kolkata has a history of football. We hope this ISL will grow the game," Khan told AFP, of the one-time former British colonial capital.

"We watch Barcelona and (Lionel) Messi on TV," the student added, in between fielding.

But the ISL drew blank faces from Mohammed Mahaboob Alam, 15, and his friends playing another match nearby.

"No, never heard of it. We play cricket," Alam said.

Comments
Topics mentioned in this article
Indian Super League Atletico de Kolkata Football
Get the latest updates on ICC Women's Cricket World Cup 2022 and IPL 2022, check out the Schedule , Live Score and IPL Points Table. Like us on Facebook or follow us on Twitter for more sports updates. You can also download the NDTV Cricket app for Android or iOS.