ISL: Mumbai City FC climbed to the sixth spot with 10 points from eight matches while Bengaluru FC's first defeat of the season has left them third, with 13 points. 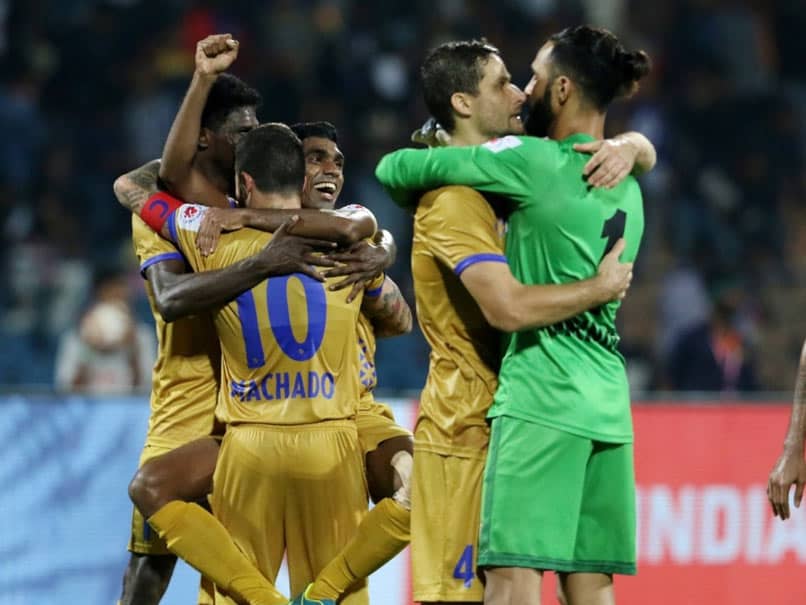 Mumbai City FC showed great character and a steely resolve as they ended Bengaluru FC's unbeaten start to the season with a spectacular 3-2 win in the Indian Super League clash at the Sree Kanteerava Stadium in Bengaluru on Sunday. Subhasish Bose's (12') header had given Mumbai City an early lead, but an unfortunate Matic Grgic (58') own-goal gave the defending champions a lifeline. Diego Carlos (77') headed in what looked like the match-winner until Sunil Chhetri (89') converted from the spot to equalise.

However, it was Rowllin Borges who scored the winner in the 94th minute as the Islanders continued their unbeaten run on the road and grabbed their first win since the opening game.

Mumbai climbed to the sixth spot with 10 points from eight matches. Bengaluru's first defeat of the season has left them third, with 13 points.

The visitors broke the deadlock in the 12th minute. Larbi delivered a terrific cross into the box from the left flank and an unmarked Bose ghosted past the Bengaluru defence to head in at the far post.

Bengaluru were unable to mount an immediate response as Mumbai pressed well. A magnificent defence-splitting pass by Erik Paartalu caught the visitors' defence unawares midway through the first half. The Australian found Udanta Singh's run into the box perfectly, but the winger failed to make use of the chance and lobbed his effort over the crossbar.

Mumbai threatened to double their lead before the break. A Modou Sougou strike on target was kept out by Gurpreet Singh Sandhu before the Senegalese striker set up Mohamed Larbi inside the box who blasted his shot over the bar.

The visitors were awarded a penalty at the stroke of half-time when Amine Chermiti and Juanan ran into each other inside the box but Larbi was denied from 12 yards by the strong gloves of Gurpreet.

The Blues started the second half as the stronger side with an intent to press higher up the field and win the second balls. Dimas Delgado nearly found an equaliser when the Mumbai defence failed to clear a long-throw-in into the box from the right flank. The Spaniard unleashed a curling strike from outside the box that Amrinder tipped away at full stretch.

The pressure paid off as the hosts soon drew level thanks to an own-goal. Grgic accidentally sent the ball into his own net after an out-swinging corner-kick by Dimas ricocheted off the defender's shoulder.

The teams struggled to keep hold of the ball for long periods as the second-half wore on. Sougou had an opportunity to regain his team's lead in the 65th minute after he was released into the box by Larbi but the striker opted to square the ball for Chermiti and the pass was intercepted well by Gurpreet.

Mumbai looked more likely to score and the goal came via a Raynier Fernandes cross that beat the Bengaluru defence. The inch-perfect delivery from the left flank found an unmarked Carlos at the far post who headed in and silenced the home crowd.

There was late drama as Sarthak Golui handled the ball inside the box and conceded a penalty in the 89th minute. Chhetri stepped up and smashed home from 12 yards to make it 2-2.

Just when it looked Bengaluru had held on for a point, and their unbeaten record in the league, a Paulo Machado corner-kick unlocked a late winner for Mumbai. The delivery was nodded towards goal by Bose and was helped into the net by Borges with a fine finish from close-range.

Bengaluru FC Sunil Chhetri Gurpreet Singh Football Indian Super League
Get the latest updates on India vs Australia Series, check out the India vs Australia Schedule for 2020-21 and Ind vs Aus live score . Like us on Facebook or follow us on Twitter for more sports updates. You can also download the NDTV Cricket app for Android or iOS.