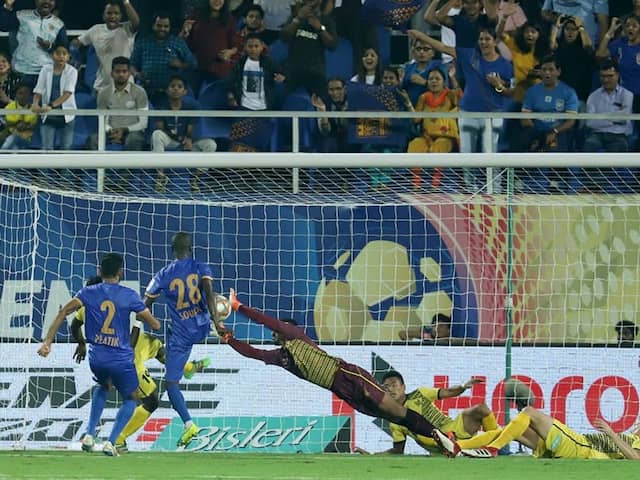 Modou Sougou's brace helped 10-man Mumbai City FC to a 2-1 win over Hyderabad FC in a Indian Super League (ISL) tie at the Mumbai Football Arena on Sunday. Bobo did get on the score-sheet late in the game for the visitors, but Hyderabad still suffered their seventh defeat of the season. The win takes Mumbai to the fourth spot, level on points with defending champions Bengaluru FC with 16 points. Hyderabad remain rooted to the bottom with a mere five points.

The very first minute saw Diego Carlos cut inside from the left and his right footed shot was just about parried away by Kamaljit Singh. At the other end, Bobo got into the action after Marcelinho did well to find him inside the box. However, the Brazilian's shot hit the side-netting.

The goal came in the sixth minute as Sougou opened his account for Mumbai. Carlos got behind the Hyderabad defence and pulled it back for Sougou who placed beyond the reach of Kamaljit to make it 1-0.

Four minutes later, Serge Keryvn found Carlos on the left and the winger's shot was just about saved by the Hyderabad custodian.

Bobo was involved in the thick of action again when he headed wide under pressure from Mato Grgic as he met a cross from Ashish Rai. Midway into the half, Bobo, who was unmarked inside the box, headed it wide, much to the disappointment of Phil Brown and co.

It took a double save from Rai on the goal-line to keep the scoreline at 1-0 in the 41st minute. A corner-kick was met by Grgic at the far post and his effort was cleared by Rai. The ball found its way to Sougou whose shot too was kept out by the former Indian Arrows defender after Kamaljit was beaten all ends up.

Brown introduced Shankar Sampingiraj for Rohit to add more creativity and bite to his midfield in the second half. Hyderabad could have got the equaliser soon after when, from a set-piece, Adil's header came off the far post and off the rebound, Bobo's attempt was inadvertently blocked by fellow team-mate Kilgallon.

In the 67th minute, Marcelinho was denied by the woodwork as the Brazilian broke free on the left and his venomous shot struck the far post.

Mumbai suffered a massive blow a minute later when Golui stopped Marcelinho in his tracks and picked up his second booking of the evening.

It were Mumbai, however, who doubled their lead. Carlos found Sougou in space and the Senegalese lobbed his effort over Kamaljit who was off his line to put Mumbai in a commanding position.

Bobo did pull one back to score his fourth goal of the campaign as he got on the end of a cross from Rai to beat Amrinder to make it 2-1.

Hyderabad created a few half chances with Robin having the best opportunity, but he lashed his effort into the stands as Mumbai stood firm and held on for their third consecutive win.

Hyderabad FC Indian Super League Football
Get the latest Cricket news, check out the India cricket schedule, Cricket live score . Like us on Facebook or follow us on Twitter for more sports updates. You can also download the NDTV Cricket app for Android or iOS.