ISL: Kerala Blasters ended their 10-match winless run in the Indian Super League with a convincing 5-1 demolition of Hyderabad FC. 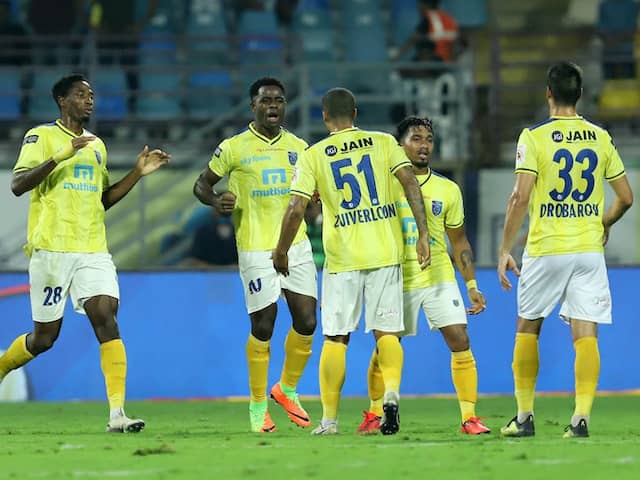 Kerala Blasters ended their 10-match winless run in the Indian Super League (ISL) with a convincing 5-1 demolition of Hyderabad FC at the Jawaharlal Nehru Stadium in Kochi on Sunday. Bartholomew Ogbeche (33', 75') scored twice in a contest that saw the visitors score the opener through Bobo (14'). Vlatko Drobarov (39'), Raphael Messi Bouli (45') and Seityasen Singh (59') also managed to add to the hosts' dominant display. It was the first time that the Kochi-based side scored five goals in an ISL game and the result takes them to the seventh spot in the table while Hyderabad continue at the bottom.

After a lacklustre start to the game in which the teams struggled to create chances, Hyderabad FC took the lead using a transition from midfield to good effect in the 14th minute. Bobo nicked the ball in the centre, and passed to Abhishek Halder who, in turn, released Marcelinho into plenty of space down the left flank.

The Brazilian forward crossed the ball low across the face of the goal for Bobo who slipped in between the centre-backs to tap it into the net.

With a midfield of Moustapha Gning and Jeakson Singh, Kerala struggled to make an impact in the attacking third initially after going behind. The hosts, however, managed to rally back into the game after the 30-minute mark.

Gianni Zuiverloon marked his return to the first team following an injury layoff with a brilliant through-ball to split the defence. Ogbeche ran into space, skipped past an onrushing Laxmikant Kattimani and slotted home.

Kerala then completed the first-half comeback in the 39th minute using a clever set-piece routine. From a free-kick on the left flank, Jessel Carneiro played the ball to Jeakson who, in turn, released Seityasen Singh into space. The Indian winger fired a cross towards the far post where Vlatko Drobarov guided the ball into the net.

The tides turned as the game neared half-time with Kerala well on top and turning out to be the better side. Messi brought down a long ball from the deep, played it wide for Halicharan Narzary who crossed and found the striker's well-timed run into the box.

With the goal gaping, the Cameroonian converted from close-range.

Conceding three goals in the space of twelve minutes had an effect on Hyderabad as they struggled to string passes together after the restart. The likes of Marcelinho and Marko Stankovic were unable to get their team back into the game and had a limited role to play.

Things turned from bad to worse for the visitors when Carneiro found Seityasen free on the right in the 59th minute. The winger dribbled forward towards the edge of the box and with no options to pass, fired a powerful shot towards goal that found a way past Kattimani's gloves.

With Hyderabad looking clueless at both ends of the pitch, Messi dribbled into the box from the right flank, outfoxed his marker Matthew Kilgallon and squared the ball for an unmarked Ogbeche in the 75th minute. The striker hit home from close-range as Kerala picked up a much-needed victory.

Hyderabad FC Indian Super League Football
Get the latest Cricket news, check out the India cricket schedule, Cricket live score . Like us on Facebook or follow us on Twitter for more sports updates. You can also download the NDTV Cricket app for Android or iOS.