ATK Mohun Bagan sent out a statement of intent across the Indian Super League (ISL), going a point within current league leaders Mumbai City FC with a solid 2-0 victory over a hapless Bengaluru FC on Tuesday. 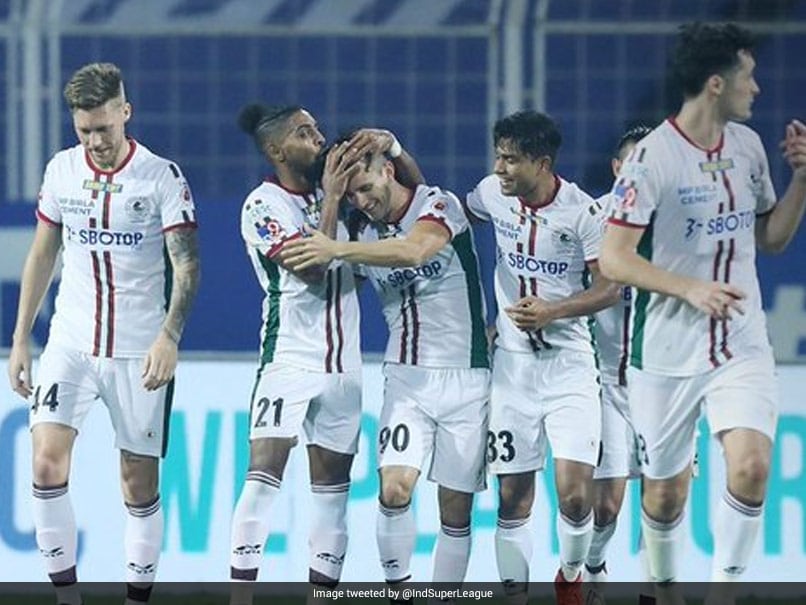 ATK Mohun Bagan sent out a statement of intent across the Indian Super League (ISL), going a point within current league leaders Mumbai City FC with a solid 2-0 victory over a hapless Bengaluru FC on Tuesday. In a first for Bagan this season, two first-half goals signalled the downfall for a beleaguered Bengaluru FC who were punished for their defensive mistakes, gifting two mouth-watering setpieces for the Kolkata side to convert with glee. Roy Krishna (37') beat Gurpreet Singh Sandhu from the spot before Marcelinho (44') put the game to rest with a freekick of the highest order.

The Mariners stand second with 33 points from 16 games while Bengaluru FC remains 6th with 19 points.

It was Bengaluru who looked more confident with the ball in the initial stages but Bagan got things under control. Bagan pressed aggressively, forcing BFC into mistakes. They were fierce with their attack and Marcelinho forced an early save from Gurpreet Singh Sandhu. The Brazilian darted into the BFC goal but his shot was saved by Gurpreet.

While Bengaluru had more possession, ATKMB attacked better and had more shots at goals. Gupreet was constantly called upon with him keeping Krishna out early on. He came up with another fine save, getting a hand to Carl McHugh's fierce shot which should have seen the back of the net.

After a series of raids, Bagan were awarded a penalty when Pratik Chaudhari brought down Krishna in the penalty box after the Fijian was set through on goal by Marcelinho. Krishna sent the keeper in the wrong direction to put his side ahead.

Habas' side went two goals ahead just before the break. Once again, BFC conceded from a set-piece. Harmanjot Khabra committed a foul on David Williams just outside the box. Marcelinho's freekick snuck past Gurpreet, his second goal in three games.

BFC continued to dominate possession but lacked attempts on goal. ATKMB continued to find the right time to pounce on opportunities. Sandesh Jhingan tried a powerful strike which Gurpreet once again kept out. The custodian prevented BFC from losing by a bigger margin.

Manvir Singh had a chance when he was set through on the right flank. But with options in the box, Manvir tried for glory only for Gurpreet to make a strong save. Bengaluru had to wait until the 87th minute for their first real chance. Sunil Chhetri managed to get past Jhingan and struck a low shot at goal but Arindam Bhattacharja dived to his right to deny the BFC skipper.

Bengaluru FC Football Indian Super League
Get the latest updates on IPL 2021, check out the IPL 2021 Schedule and Indian Premier League Live Score . Like us on Facebook or follow us on Twitter for more sports updates. You can also download the NDTV Cricket app for Android or iOS.