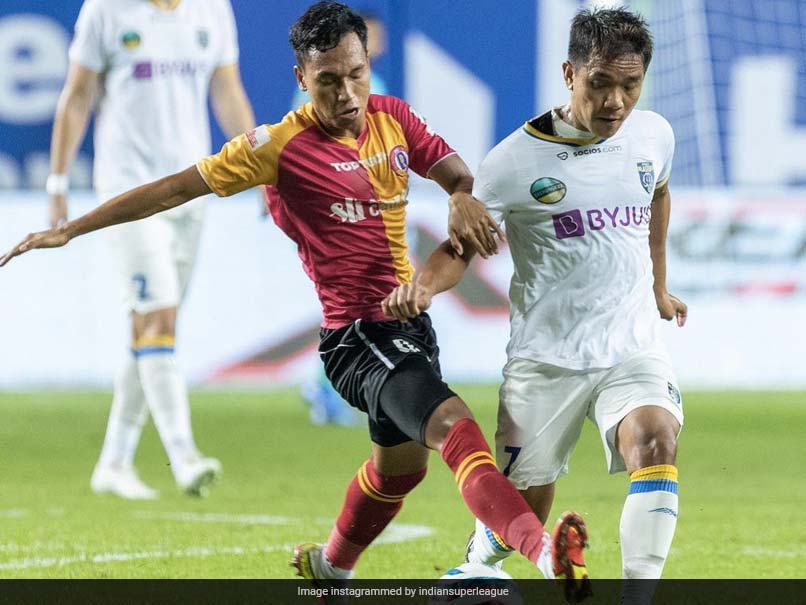 ISL: East Bengal were held to a 1-1 draw by Kerala Blasters.© Instagram

SC East Bengal's search for the first win in this edition of Indian Super League continued as they were held to a 1-1 draw by Kerala Blasters FC at the Tilak Maidan Stadium on Sunday. This was the third consecutive draw between these two teams in the ISL which extends SCEB's winless streak to six games. Tomislav Mrcela (37th) opened his account in the ISL by scoring with a header for SC East Bengal before Alvaro Vazquez (44th) equalised with a well-taken shot just before halftime.

Alvaro Vazquez looked to have sent the Blasters into the lead but the referee reversed his decision and disallowed the goal as he blew his whistle before the striker had put the ball past the goalkeeper.

Within minutes after that incident, Prabhsukhan Gill made a crucial save, keeping Antonio Perosevic at bay.

There was a dearth of scoring opportunities in the first half until Tomislav Mrcela found the back of the net with his head. The centre-back got on the end of a long throw from Raju Gaikwad and headed the ball past the keeper from close range.

KBFC then lost their defender Enes Sipovic to an injury as he left the pitch disappointed and got replaced by Abdul Hakku.

With a couple of minutes to go to halftime, Vazquez's right-footed shot from outside the box took a wicked deflection from Mrcela and went inside the back of the net, pulling the game back to equal terms.

Thongkosiem Haokip and Amarjit Singh Kiyam received a yellow card each in the first half for poor challenges.

The second half got off to a cagey start with both teams canceling each other out and struggling for momentum in the final third.

Vazquez attempted a long-range shot late into the second half which was parried away by the goalkeeper. It was the last contribution from the Spaniard as Ivan Vukomanovic sent Jorge Diaz in his place from the bench.

A second goal was disallowed for the Yellow Army on the stroke of 89th minute after Diaz seemingly pushed a defender before heading a cross into the net. The contest ended without any goals in the second half and the points were shared between the two sides.

SC East Bengal will face Khalid Jamil's NorthEast United in their next fixture on Friday while Kerala Blasters FC have a tough match against reigning champions Mumbai City FC.

Kerala Blasters FC Indian Super League Football
Get the latest updates on Fifa Worldcup 2022 and check out  Fifa World Cup Schedule, Stats and Live Cricket Score. Like us on Facebook or follow us on Twitter for more sports updates. You can also download the NDTV Cricket app for Android or iOS.