ISL: Despite plenty of chances, both NorthEast United and Kerala Blasters failed to find a goal and ended up sharing points over a 0-0 stalemate. 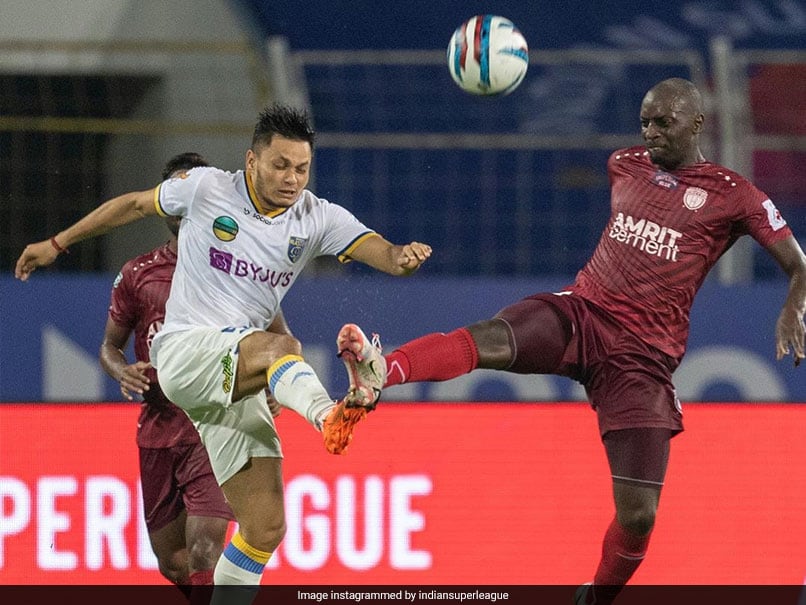 ISL: NorthEast United and Kerala Blasters played out a 0-0 draw on Thursday.© Instagram

After facing defeat by similar margins in their opening round game, NorthEast United FC and Kerala Blasters FC drew 0-0 as both teams were locked in an intense battle, in a 2021-22 Indian Super League (ISL) match at the Pandit Jawaharlal Nehru Stadium in Fatorda on Thursday. Kerala would rue a great chance to earn full points, having to blame all but themselves for some shabby finishing, especially with a lacklustre display by NEUFC's forwards. Ivan Vukomanovic handed young Vincy Barretto an ISL debut on the right-wing as Enes Sipovic made his debut in yellow at the heart of the defence.

While neither side could carve out clear-cut chances in the opening exchanges, NorthEast did look threatening a couple of times. VP Suhair was the architect of Deshorn Brown and Khassa Camara getting half-chances to convert. The latter did slice a couple over the net from distance.

However, the highlight remained a right-footed free-kick from Hernan Santana that went inches above after Enes Sipovic had brought down Deshorn on the run.

At the half-hour mark, Blasters captain Jessel Carneiro swung in a cross that ultimately found Adrian Luna. His chip over the defensive line had Jorge Diaz almost head in the opener of the night.

Both teams remained compact in the first period as both sets of strikers found it incredibly tough to get going in the opposition half.

Five minutes into the second half, Sahal Abdul Samad missed a golden opportunity. Vincy blazed through the pitch after winning a second ball. He squared it into the box but with only the keeper to beat, Sahal grazed it wide.

Vincy kept trying hard to help his forwards but playmaker Adrian Luna was not clinical enough in the box. Both managers switched personnel with Alvaro Vazquez and Coureur arriving into the game for Blasters and NorthEast respectively.

In a change of formation, Sahal was taken off for wing-back Nishu Kumar, returning after being sidelined for up to ten months through injury for the final quarter-hour.

Kerala had their best chance of the night towards the final minutes courtesy of a brilliant pass by Nishu but teammate Alvaro Vazquez could not finish a rather easy header thanks to a spectacular save by NEUFC goalkeeper Subhasish Roy Chowdhury.

Both teams cancelled each other out, visibly frustrating both Jamil and Vukomanovic in an intense battle of tactics

Kerala Blasters FC Indian Super League Football
Get the latest updates on ICC Women's Cricket World Cup 2022 and IPL 2022, check out the Schedule , Live Score and IPL Points Table. Like us on Facebook or follow us on Twitter for more sports updates. You can also download the NDTV Cricket app for Android or iOS.