The contest was marred by injuries to key players from both teams as Jairo Rodriguez, Raphael Messi Bouli and Aridane Santana had to be substituted in the first half. 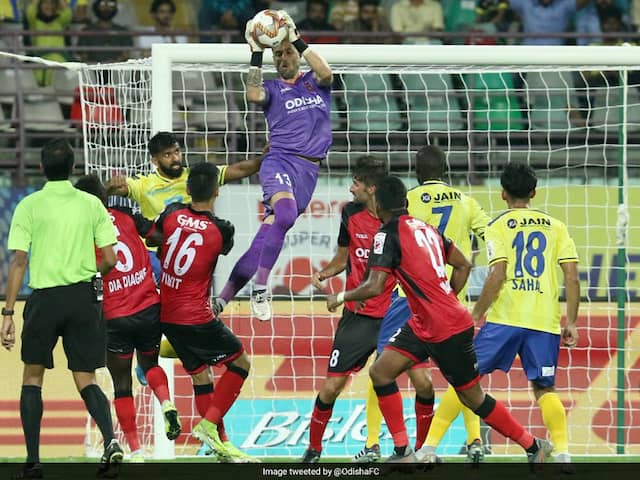 Kerala Blasters FC and Odisha FC now have four points each from as many games.© Twitter

Kerala Blasters FC remained without a win for the third consecutive match in the Indian Super League (ISL) following a goalless draw against Odisha FC at the Jawaharlal Nehru Stadium here on Friday. The contest was marred by injuries to key players from both teams as Jairo Rodriguez, Raphael Messi Bouli and Aridane Santana had to be substituted in the first half. The changes affected the pace of the game that ultimately ended without a winner.

Blasters and Odisha now have four points each from as many games and occupy the fifth and sixth position on the league table, respectively.

Blasters, who were already hampered by injuries this season, suffered a major blow in the fourth minute when captain Jairo Rodriguez went down injured. He was replaced by Abdul Hakku.

However, the home side continued to press high up the field to try and take the game to their opponents, but Odisha were well organised at the back.

A cautious period of play early on came to a halt when a head-on collision inside the box following a corner-kick left Aridane Santana and Messi Bouli requiring medical attention. Following a long pause, the game resumed with Mohammed Rafi and Carlos Delgado replacing the injured players.

With both teams struggling to create clear-cut chances, Sahal Abdul Samad took matters into his own hands as he embarked on a stellar solo run after picking up the ball from the right flank. The midfielder outfoxed three defenders before Narayan Das brought him down inside the box, but the referee rejected vociferous appeals for a penalty.

Blasters were the better side in the first half, although by fine margins. Mohammed Rafi's drilled cross into the box from the right was met by Rahul KP whose audacious volley failed to test goalkeeper Francisco Dorronsoro.

The teams struggled to raise the tempo and keep hold of the ball after the break as well. Odisha threatened when Jerry Mawihmingthanga's cross put TP Rehenesh in a spot of bother. The goalkeeper spilled the ball inside the box but Nandhakumar Sekar hit the rebound into the side-netting.

There were a couple more chances at either end as the game wound down, but a goal remained elusive.

With four minutes left, a Prasanth cross from the left was flicked towards the far post by second-half substitute Bartholomew Ogbeche for Rahul whose firm shot was kept out by Dorronsoro. Daniel Lalhlimpuia, at the other end, spurned a chance as well as both teams settled for a point.

Odisha FC Indian Super League Football
Get the latest Cricket news, check out the India cricket schedule, Cricket live score . Like us on Facebook or follow us on Twitter for more sports updates. You can also download the NDTV Cricket app for Android or iOS.