ISL: Fran Sandaza and Joel Chianese scored for Hyderabad FC in their win vs Chennaiyin FC, at the Tilak Maidan. 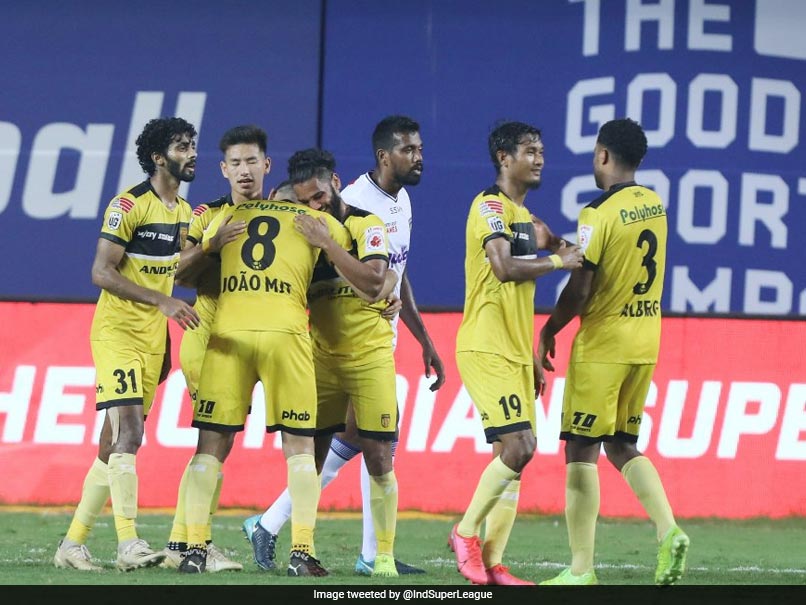 Hyderabad FC have bolstered their chances of making the Indian Super League playoffs with a 2-0 victory over Chennaiyin FC at the Tilak Maidan Stadium on Sunday. Goals from Fran Sandaza (28') and Joel Chianese (82') were enough to secure all three points for the Nizams and propel them to third place on the table. Hyderabad made their intentions clear right from the start, winning a corner in just the fifth minute. The promising Asish Rai, who has enjoyed something of a breakthrough season, was the architect of the move, sprinting into the Chennaiyin box and finding Mohammed Yasir. After the latter's cross was put behind for a corner, Rai got another chance but sent his cross over.

Hyderabad kept attacking in the first quarter and they got their reward just before the half-hour mark when Sandaza broke the deadlock. After receiving the ball from a throw-in, the Spaniard found Joao Victor, who returned the favour with an excellent through ball. Sandaza was still under pressure from Deepak Tangri but shook off the defender by shifting the ball onto his other foot and slotting it into the back of the net.

Chennaiyin had a period of possession after the goal but poor passing in the final third meant nothing came of it. As the first half came to a close, Sandaza's goal was the only shot on target from either team.

Chennaiyin came out of the half-time break with a couple of changes -- Fatkhulo Fatkhulloev and Edwin Vanspaul came on for Germanpreet Singh and Thoi Singh -- and the move looked to have paid off immediate dividends. Eli Sabia came up all the way from defence and found himself with direct sight on goal. His powerful shot from outside the box looked to be going in, but instead struck the crossbar and bounced away.

The crossbar once again came to Hyderabad's rescue and this time, it was substitute Fatkhulloev's turn to rue what should have been a goal.

Hyderabad looked resigned to sitting back and defending as Chennaiyin went from being having less of the ball in the first half to dominating possession in the second. However, their lack of creativity and wastefulness in front of goal was on show once again -- with ten minutes left in the game, they managed just a single shot on goal.

They soon paid for that when Hyderabad put the game beyond all doubt with a second goal. Chianese, who had replaced goalscorer Sandaza early in the second half, was played through by another excellent pass from Victor. Chianese had only a narrow target to aim at but he found the back of the net with ease.

Chennaiyin FC Indian Super League Football
Get the latest updates on T20 World Cup, check out the T20 World Cup Schedule and Live Score . Like us on Facebook or follow us on Twitter for more sports updates. You can also download the NDTV Cricket app for Android or iOS.