ISL: Jamshedpur FC, despite the draw, remain at the top of the standings with seven points from three matches. 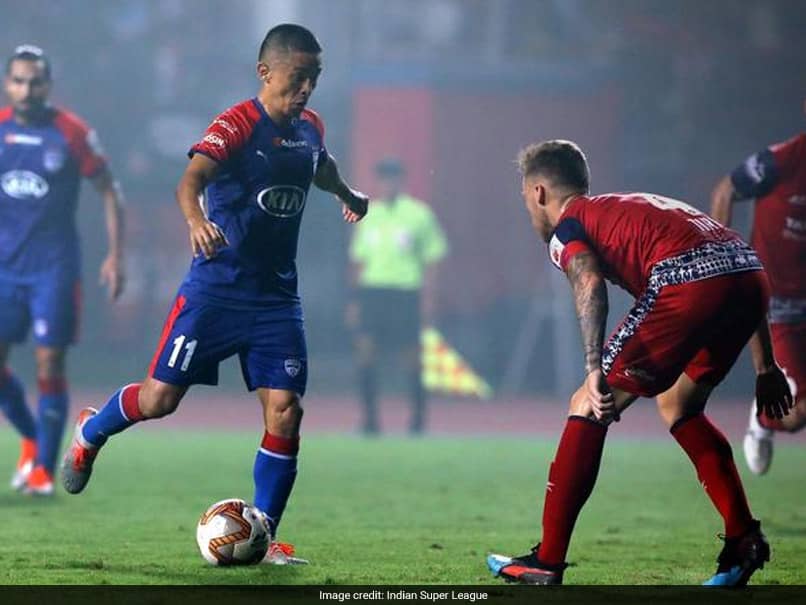 Jamshedpur FC dropped points for the first time in the sixth season of Indian Super League (ISL) after a goalless stalemate against Bengaluru FC at the JRD Tata Sports Complex in Jamshedpur on Sunday. There were chances created at both ends with Bengaluru dominating the proceedings, but both goalkeepers' excellence came to the fore as the attackers were denied goals. Despite the draw, Jamshedpur remain at the top of the standings with seven points from three matches.

Bengaluru, on the other hand, remain winless so far this season and are placed seventh, having registered three consecutive draws.

The defenders of both sides were tested within minutes from the kick-off. Sunil Chhetri's piledriver, which swerved in the air as it travelled towards the goal, was punched away by Jamshedpur goalkeeper Subrata Paul. Seconds later, a counter-attack resulted in Sergio Castel having space and time on the ball at the edge of the box, but the striker's low shot ricocheted off the woodwork.

Bengaluru attempted to put the hosts under pressure with efforts from Juanan and Raphael Augusto testing the Jamshedpur defence. In the 20th minute, a Dimas Delgado corner was flicked across the goal by Juanan. The ball fell perfectly for Harmanjot Khabra but he was denied by Paul with a spectacular reflex save from close range.

Jamshedpur fashioned a chance to score from a corner kick just before the break. Piti received the short corner from the right at the edge of the box, danced past a crowd of Bengaluru defenders before chipping the ball towards the other side of the post, but the cross was aptly cleared by an alert Bengaluru defence.

After the moment of brilliance in goal by Paul in the first half, his opposite number Gurpreet Singh Sandhu's reflexes were tested when Farukh Choudhary attempted an audacious bicycle-kick inside the box from a corner but the India No. 1 produced a one-handed save from point-blank range.

Paul was called into action again when Ashique burst forward down the left flank in a quick counter-attack. The Kerala-born winger dribbled into the box and tried to beat the goalkeeper at his near post, only for the latter to repel the effort.

In the end, neither team was able to fashion a goal as the match ended in an action-packed stalemate.

Bengaluru FC Sunil Chhetri Gurpreet Singh Indian Super League Football
Get the latest updates on India vs Australia Series, check out the India vs Australia Schedule for 2020-21 and Ind vs Aus live score . Like us on Facebook or follow us on Twitter for more sports updates. You can also download the NDTV Cricket app for Android or iOS.