ISL: David Williams struck a peach of a goal to open his account and help ATK Mohun Bagan (ATKMB) beat heavyweights Bengaluru FC 1-0 in the ISL on Monday. 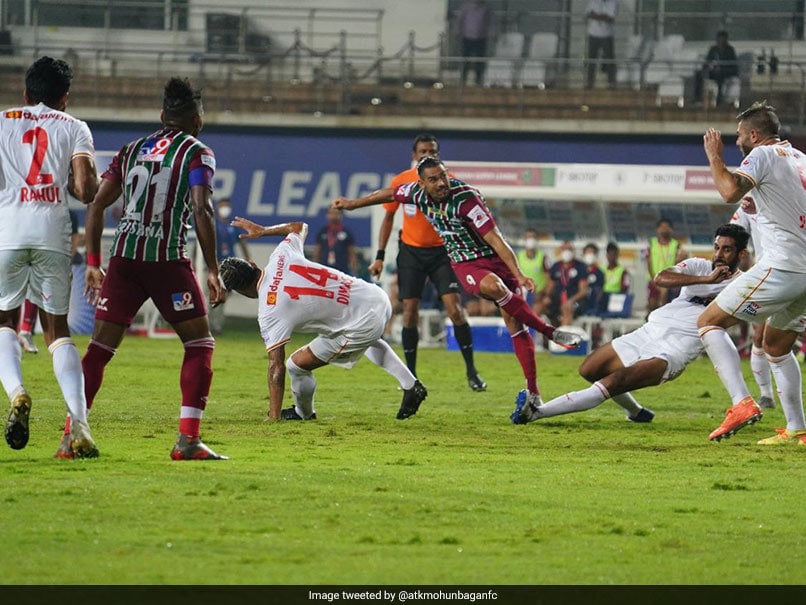 David Williams struck a peach of a goal to open his account and help ATK Mohun Bagan (ATKMB) beat heavyweights Bengaluru FC 1-0 in the Indian Super League (ISL)in Margao on Monday. The Aussie showed great control and composure to give them a 33rd minute lead in a spectacular fashion to make all the difference in a dominating show by the Mariners, who remained behind Mumbai City on goal difference despite being on 16 points from seven matches.

Bengaluru FC played their hearts out to score an equaliser but looked clueless against an organised ATKMB defence to snatch a point and suffered their first loss from seven matches to remain on third position. They are now four points behind the leaders at 12 points in the 11-team standings.

ATKMB started the first-half on the front foot and looked more threatening than their counterparts and the Aussie made all the difference with his belter of a goal.

The Sunil Chhetri-captained side on the other hand looked clueless in their attacks and hardly troubled ATKMB goalkeeper Arindam Bhattacharja.

The inclusion of Edu Garcia also bolstered the Mariners' as the Spanish winger looked fluid and put the Bengaluru defence under pressure early on.

In the 11th minute, a surging Garcia took the possession from Roy Krishna to raid the opponent's box before Rahul Bheke thwarted an early danger.

Looking a transformed side, ATKMB dominated the proceedings and Manvir Singh and Roy Krishna also came close to scoring early on. But it was just after the half-hour cooling break, Williams hit the top gear when he got a long cross-field ball on the left outside the box. He dislodged two defenders with his outstep and then unleashed a pile driver on the top corner of the net.

In the 51st minute, Williams almost scored his brace when Roy Krishna got the ball on the left inside the box and laid it back at the edge of the box for the Aussie.

Williams hit it the first time and almost found the top corner again but this time it sailed over the bar. ATKMB's Fijian marksman Krishna almost doubled the lead after receiving a long ball from Tiri but his shot flew over the crosspiece from a one-on-one with Gurpreet.

Bengaluru FClooked desperate to find a way through ATKMB's defence and had their best opportunity to equalise in the 74th minute but Cleiton Silva missed a sitter from close range.

Bengaluru FC Indian Super League Football
Get the latest updates on IPL Auction 2023 and check out  IPL 2023 and Live Cricket Score. Like us on Facebook or follow us on Twitter for more sports updates. You can also download the NDTV Cricket app for Android or iOS.