Zequinha was the star of the show, striking in the 73rd minute to give his side the lead and the winner. 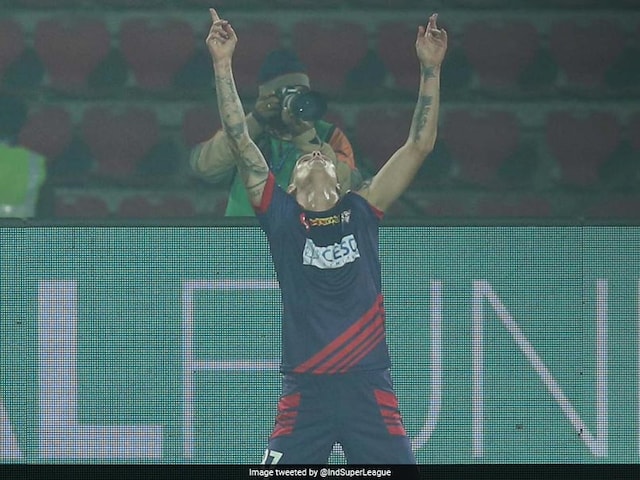 ATK held their nerves to defeat NorthEast United FC 1-0 in a vital away victory in an Indian Super League encounter, on Friday. The victory lifts them to sixth place after nine matches and suddenly gives them hope, and takes some wind off the sails of NorthEast United FC, who had beaten FC Goa in their previous encounter. Zequinha was the star of the show, striking in the 73rd minute to give his side the lead and the winner. He had been threatening for a while before the ball graciously fell to him after a period of pressure from ATK.

The Portuguese hammered in a volley into the far corner, his connection too sweet to not find the back of the net.

If the first half was a slow affair, the second one started with a bang. Danilo Lopes made easy work of Jordi Montel before taking a stinging shot from outside the box.

Debjit Majumder was equal to the task though, making a breath-taking fingertip save to deny the hosts. Montel made his presence felt at the other end though, when his header was a whisker wide.

He then released Zequinha on the left to cross for Robin Singh but Sambinha was in the way to stop the Indian striker from scoring.

Lopes wasn't done making Montel look like a bad defender. He was at the end of a Nirmal Chhetri long ball and Montel allowed the attacker to run in behind. His first time effort was as audacious as it was close to going in the back of the net.

Zequinha and Lopes were ruling the second half. As the game went into end-to-end mode, the former cut in, like he so often does, and forced a fine save from TP Rehenesh.

It was becoming inexplicable how the match was still goalless when Zequinha struck to break the deadlock.

The opening exchanges saw a well-drilled NorthEast keep possession even though it was meaningless, attempting to draw out ATK rather than take the attacking initiative.

It was only after Malemngamba Meitei started showing his ability to run with the ball and deliver that NorthEast grew in confidence going forward.

First, he produced a fine run before being halted, and was at it again with a good delivery which ATK had to be alert to clear.

Debjit Majumder's howler almost cost ATK when the goalkeeper needlessly came out for a ball which Tom Thorpe was seeing off - got into a mess with his teammate - before Thorpe cleared away.

ATK broke forward in the 24th minute through Zequinha's neat run and shot which sailed just over the crossbar. Meitei then threatened again for NorthEast and this time his delivery found Sambinha, whose header was woefully directed wide. Then, within the space of seven chaotic minutes for NorthEast, ATK produced two lovely chances.

Jayesh Rane's shot was blocked after an exquisite through ball from Ryan Taylor and then at the stroke of half time, Zequinha blasted it over again when he had the time and space to pick his spot. However, he would eventually deliver to put ATK out of their misery.

Comments
Topics mentioned in this article
Atletico de Kolkata NorthEast United FC Football Indian Super League
Get the latest Cricket news, check out the India cricket schedule, Cricket live score . Like us on Facebook or follow us on Twitter for more sports updates. You can also download the NDTV Cricket app for Android or iOS.